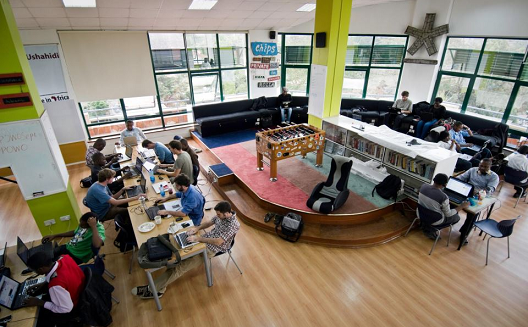 From sidewalk hustlers and street vendors, to young techies and the growing number of self-made millionaires, Africa is a continent brimming with entrepreneurs. In the absence of government safety nets, sufficient jobs for college graduates, and opportunities for poor youth, many individuals turn to entrepreneurship simply to survive.

Yet it’s only recently that the term “entrepreneurship,” has shifted from signifying a “way of life” or a means of survival, towards being a proxy term for systemic “success and growth”, now used as a buzzword for philanthropists, development agencies, governments, and individuals across the continent. The pursuit of entrepreneurship as a “career” has finally started to gain acceptance and legitimacy in Africa.

Recently, the Omidyar Network, the globe-reaching philanthropic investment firm established by Pierre Omidyar, founder of eBay, released its report “Accelerating Entrepreneurship in Africa,” in partnership with the Monitor Group, to begin looking at this legitimacy.

The 48 page in-depth report surveyed 582 entrepreneurs across six sub-Saharan African countries (Ethiopia, Ghana, Kenya, Nigeria, South Africa), bringing together business, government and thought leaders to analyze the survey findings and benchmark them against peers in China, India, and USA. In short, it’s one of the most comprehensive reports on African entrepreneurship thus far.

“Despite the positive economic news and encouraging trends that have emerged from Africa over the past decade,” the report begins, “the troubling reality remains that the everyday livelihoods of Africans have not kept pace with macroeconomic growth, and per capita GDP levels on the continent persistently lag behind the rest of the world.”

Omidyar believes that entrepreneurship can address this “stubborn income gap in Africa”, if, and only if, entrepreneurship evolves beyond its current state of “necessity-based informality” into one that is “vibrant and robust enough to promote sustained economic growth and generate long-term, viable livelihoods across the continent.”

In short, the authors want to understand and accelerate this broad shift of entrepreneurship from an informal activity into a vehicle for developing Africa’s economy. 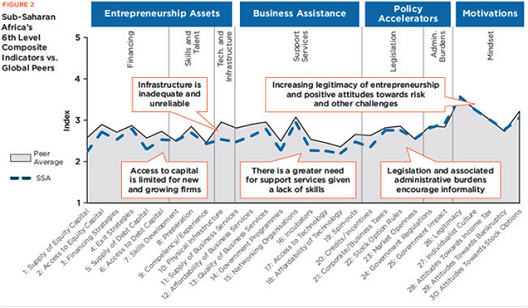 For those who want to know more about the African market and its barriers, the report is a “must read” for its depth and analysis, says Venture Burn. Yet the findings are not surprising. The greatest challenges to entrepreneurship, it concludes, are financing, skills and talent, and infrastructure.

As in most emerging markets, institutional financing for entrepreneurs remains limited in the nations surveyed.

As a result, notes the International Finance Corporation, up to 84% of small and medium-sized enterprises (SMEs) in Africa are either un-served or underserved, highlighting a massive credit financing gap of US$140 to $170 billion.

Financiers, however, claim that most ventures simply aren’t fundable or don’t appear viable. VCs especially cite a lack of sound business plans, quality and feasibility of the business idea, and perceived commitment of the entrepreneur as reasons for slow deal flow. 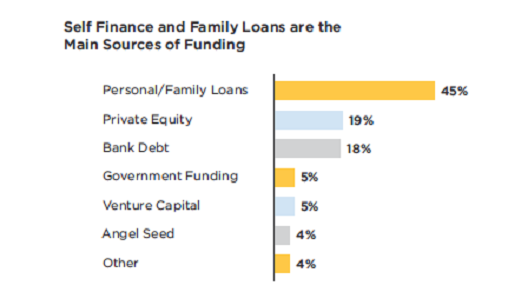 One of the greatest issues that startups face in Africa is common to many startups globally: finding experienced managerial talent to complement a technical team. Just because someone is an incredible developer or engineer doesn’t mean they make a great manager or CEO.

With little funding or incentives for perspective employees (other than faith in the company’s future stock and success), startups often lose out on the best talent, who get snatched up by larger, well-established firms such as telecoms and banks.

The limited pool for skilled managerial talent, according to the report, is in many cases linked to the education system.

“Most African education systems focus on preparing the workforce for employment by more-established firms. The existence (or lack thereof) of entrepreneurship training in the education system plays a crucial role in this discussion. Entrepreneurs in Africa require training and education to allow them to succeed in starting or growing a business. Furthermore, entrepreneurs need a skilled workforce to meet their business goals.” 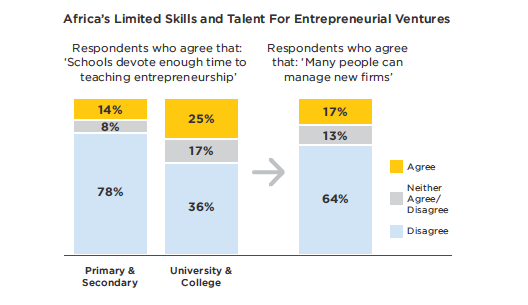 It’s perhaps no surprise that infrastructure rounds off the list of challenges. While in some places, like Kenya, a high-speed fiber optic backbone has enabled an ecosystem of ICT entrepreneurs to build apps and web and mobile services, in others connections are dismal- and a lack of physical infrastructure presents an enormous barrier.

“The poor state of infrastructure across Sub-Saharan Africa is a significant obstacle to the growth of entrepreneurial enterprises; it severely affects entrepreneurs’ costs, market access and efficiencies,” the report reads.

For most, the biggest challenge to running a business is a lack of electricity.

“Unreliable electricity supply, poor quality and limited breadth of road and rail networks, and poor communications infrastructure are all highlighted as having a significant impact on the cost of doing business” the report says.

The situation, when it comes to accelerating entrepreneurship in Africa, could seem hopeless, or at least somewhat depressing. The barriers of finance, talent and infrastructure are not quick fixes; they demand large scale, systematic overhauls to create an enabling environment for the continent’s entrepreneurs.

Yet no one would disagree that entrepreneurs are still succeeding despite the challenges they face. Six out of the ten fastest growing economies are now in sub-Saharan Africa. If active stakeholders (government, NGOs, and universities) could fix what’s not working, one can only imagine the potential.

The report offers several recommendations for doing so, from reducing the bureaucracy for early-stage companies when it comes to accessing government funding, and including entrepreneurial and vocational training in African education systems, to instituting mentor networks and giving priority to infrastructural upgrades in selected productive areas.

Whether these changes will happen quickly, slowly, or even at all, is the real questions. Yet simply by identifying and presenting the challenges, Omidyar and Monitor have pushed the needle a bit further in the right direction.

Photo of iHub in Nairobi Kenya.