I was getting so excited to finally see you again at Mix N' Mentor Casablanca after the time we met in 2009. At the time, I was working on Yamli and you were doing some work on the side for the Moroccan radio station “Atlantic Radio.” You tracked me down at LeWeb in Paris for an interview and we immediately hit it off. Your passion for entrepreneurship was clear, and your commitment to better your country’s ecosystem and give back was contagious.

A few years later, in mid-2012, we got closer when you reached out to Wamda to write for us. You said we didn’t have enough coverage of the Moroccan startup scene and you wanted to give exposure to the innovators of your country. And exposure you gave! You took your time perfecting your pieces, sometimes being always late on the deadline because you were worried that you might not be giving enough justice to the entrepreneurs you were covering. But you touched every entrepreneur you interviewed, beyond just putting words on a blog; you always went the extra mile, thinking of ways to support and help them with their problems.

When I asked if you could help set a tour of your country’s entrepreneurship ecosystem for the World Bank and other international investors, you immediately jumped on it as a kid with a birthday cake. You were always ready to support, always proud, always ready to give back. You were excited to help bring Mix N' Mentor to Casablanca, even though you didn’t have much free time lately. The Wamda team was so touched by your generous soul that we even drafted a Wamda Ambassador program around you. When you stopped responding to emails two weeks ago we were confused, as it wasn't typical of you; you are always connected, available, dependable. 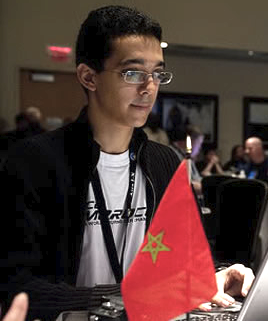 When we got an email from your friends yesterday that you had been in a coma for two weeks, we were shocked, speechless. I never could think you can take energy away from the Wamda team, but yesterday it was like everyone trying to channel it back to you.

We were still hopeful. Doctors had said the earlier surgery didn’t go well and your chances were slim, but we didn’t believe it. I didn’t believe it. You can’t leave, it’s too soon, your country needs you, your entrepreneurs need you, and most importantly, your family needs you... But so you did, you left us this morning, and as we scramble to understand life’s injustice, your impact will be felt forever, you were a role model to many, an entrepreneur, a writer, a supporter, an enthusiast, an entrepreneur a friend, a champion... You will forever be the Champion of Moroccan entrepreneurship.

We often chatted and talked on the phone about ideas and ways to move the mission of entrepreneurship. And while it’s true that we only met once, you forever have touched my soul. You will be dearly missed, my friend, champion of Moroccan entrepreneurship.