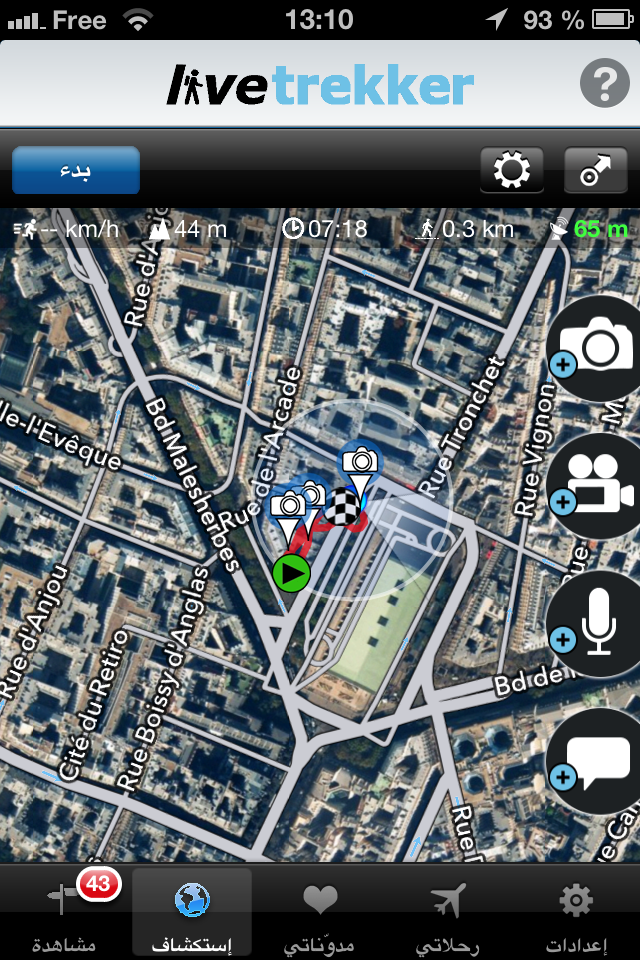 Though it’s been tried by Arab companies before, and failed, French startup Trekea Media, Inc. is expanding their real-time mobile travel recording app LiveTrekker to the Arab world.

With a rapidly expanding mobile, and smartphone, market in the Arab world, startups continue to look to the region as a priority for expanding their customer base.

Now, Paris-based company Trekea Media, Inc. hopes that their new Arabic version of smartphone app LiveTrekker, which launched just last month, will attract Arab travelers, both inside and outside of the region.

LiveTrekker enables travelers to document their journey via their smartphone by relying on a Google Maps-style GPS tracker that records their path and lets users upload, and share comments, pictures and videos along the way. The map records a traveler’s path in real-time, allowing friends and family to follow online as you move around a city.

“The Arab market is growing and maturing quickly, characterized by strong economic dynamism and a young population keen on acquiring new knowledge and contributing to the global society. Our aim here is to be a part of that dynamism and to help others to contribute to it,” says Jean-Marc DeBaud, LiveTrekker’s  Executive Director.

LiveTrekker users can also benefit from other users’ travel experience; the application recommends  popular tourist destinations and restaurants that other app users have visited in the area. With this new version, the company believes that users in the Arab world will constitute at least 20% of the app’s global userbase.

What sets this app apart from other similar trip trackers is the ability to use it offline; once you’re reconnected to the internet, the app automatically uploads all of the data it stored while disconnected.

But the Arab world has seen similar projects before; one attempt in particular, Jabbar’s Sawty, which was supposed to be a web-based travel-sharing platform, never really took off. Other apps like Trip Journal Lite, MapQuest and Travelog are available globally, but haven’t taken off in the region, possibly due to one gap, which LiveTrekker is trying to fill: Arabic functionality. Although DeBaud wouldn’t comment on their numbers, he already considers the Arabic launch “a huge success,” but only time will tell if he’s right; the app hasn’t even been available for a month yet.

Apart from privacy concerns with a live tracking app in the Middle East, another question pops into mind: are there actually accurate enough maps available for the whole Arab world? Much of the region’s restaurants and destinations, especially outside of urban areas, remain unmarked on Google Maps, though app users could possibly begin filling in the gap by mapping new locations themselves. It’s a hurdle that LiveTrekker’s team will have to overcome to make the mapping meaningful for users in the region, but they remain confident in their plans to continue growing and adapting to their new market.

“Our goal is to give users the chance to record important stages in their lives and share them with friends and family in a safe way, so we are looking into more effective and secure technologies as we grow,” says DeBaud.

The Arabic version of LiveTrekker is available for free on both iOS and Android.