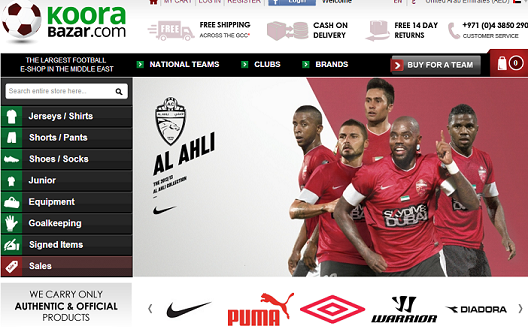 It's not hard to see a Barca jersey almost anywhere in the Arab world these days. But when it comes to finding more obscure jerseys, the process of ordering from abroad can be difficult.

“At some point, I was looking to find a jersey for the Greek national team, but I couldn’t find it in the store, so I ordered it online,” says Yorgos Kleivokiotis, a Greek entrepreneur based in Dubai. After ordering it online from a store in the UK, he waited weeks before finding out that it was stuck in Emirati customs. The jersey was then sent back to the UK and a new one was resent to his home. It turned out to be the wrong size, but was too expensive to return.

Exclusivity is hard to come by, but a trade license grants the startup access to brands that could be difficult to access otherwise. “We have a lot of products that are more difficult to find than anywhere else, but in this market there is no exclusivity,” Kleivokiotis admits. “For example, Nike has certain lines that are only available for category specialists,” adds cofounder Ghazi Ben Amor. While they are available worldwide, only certain registered suppliers, like KooraBazar, are allowed to sell them.

The startup is targeting three segments: those who play football and need training equipment and apparel, fans that collect merchandise and memorabilia, and those looking to buy custom apparel. For corporate, school, or university teams, the site offers custom jersey printing, which can by ordered via telephone and paid for online. It also offers cash on delivery (COD), credit card, and PayPal as payment options.

Although they are focused heavily on the GCC, international consumers make up a good chunk of their business. As the official supplier of products from the Emirati football team Al Ahly, the startup often sees fans in the diaspora ordering the jerseys of their favorite players- or those who are traded from a European team to the GCC. 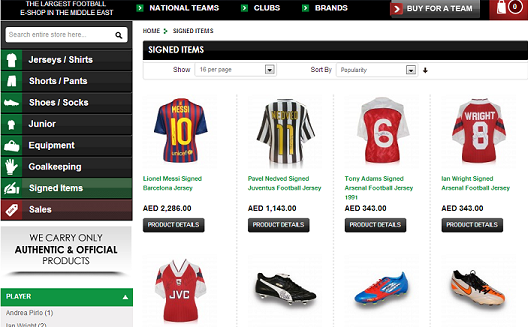 "Don't rush in because it's fashionable"

The story of how Kleivokiotis and Ben Amor started the company might sound familiar to many; both began working as consultants and trying their hand at several startups in Dubai after they graduated from INSEAD business school in 2006. Last year, tired of working for other people, they decided to launch their own idea.

“We started working on this around the end of last summer and spent time doing research, building the website, identifying suppliers and getting the trade license, which was not an easy task. And then eventually we went live and started selling,” says Kleivokiotis.

Their story may sound somewhat typical, but that doesn't mean it's been easy. “I would advise someone to wait for the right time, not to rush in to it because it’s fashionable to work on a startup. Usually setting up a company takes much longer and costs a lot more than you initially think,” says Kleivokiotis. “Everyone needs to wait for the right time before they get into it.”

But it's still early days at KooraBazar. “If we count the mannequin that we use for the pictures, we have four team members,” jokes Ben Amor.

After raising money from family, friends, and now some larger investors, the company is still bootstrapping. “We’re still trying to be very lean at this stage,” says Kleivokiotis.

Advice for starting in Dubai

After living in Dubai for seven years, the cofounders find some particular benefits to starting a business there; as a regional node, Dubai is an easy location to ship from and offers a huge pool of talent and partners.

For entrepreneurs looking to start an e-commerce startup in the region, the cofounders offer some advice. “It’s important to be differentiated; it’s important to stand for a product line or for an idea,” says Ben Amor. “You have a lot of copycats that try to emulate successful companies in the region, and you just don’t remember any of their names; you don’t know what they really do.”

The founders may be taking a dig at some of the e-commerce startups who have recently cropped up, although most of the companies that we've interviewed certainly have a sense of what differentiates them, sometimes overusing words like "quirky" and "unique." It all comes down to execution, however; whether KooraBazar- or any e-commerce startup- can get products into customers' hands quickly and easily will determine their fate.

Of course, the team is also eyeing the Saudi market. While the team of three sees most of their traction coming from the UAE, where they use Aramex as a shipping and warehousing partner, they have high hopes for serving football fans next door. “Football is huge in Saudi Arabia so we’re really counting on that market,” says Kleivokiotis. “It will probably be our biggest market in the future.”