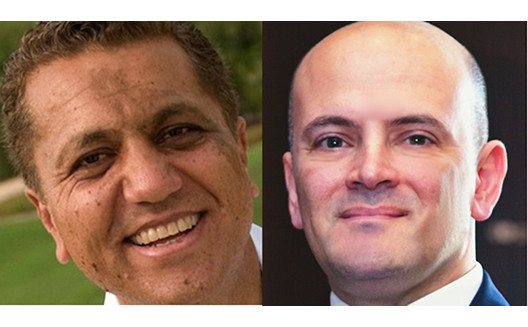 Ahmed Nassef, one of the Middle East’s early internet pioneers, announced last month that he has left his role as Yahoo! VP and managing director for the Middle East and Africa, to launch Telfez, a new social television startup.

In a company statement, Yahoo said, “A true digital pioneer, Ahmed was part of the Maktoob team since 2001 and played an instrumental role in its growth over the years through to its acquisition by Yahoo! in 2009. We thank Ahmed for his contributions and wish him the best in his future endeavors.”

Nassef is launching Telfez along with Tamer Rashad, the former Managing Director and Head of Merrill Lynch Middle East and Africa, who also recently founded Humtap, a platform for sharing original music recording. Telfez will allow users to “to share, discuss, and discover TV content in a way that's simple, intuitive, and fun,” with a focus on emerging markets.

One of the biggest challenges that a social TV startup will face is gaining enough of a userbase to make the experience worthwhile, and keeping those users from straying to other platforms. This might be true of any startup, but when a platform’s value rests upon social conversation, it’s even more critical to get the interface right the first time, and iterate quickly to keep the crowd engaged.

With a simple platform that operates on web, tablet, and mobile, Nassef and Rashad hope to avoid the barrier to use that hardware products like smart TVs have, while moving quickly to grab market share by launching as a first mover in the Arab world and Africa, with offices in California and Dubai.

Here’s their take on what social TV offers an emerging market:

Why build a social TV platform for emerging markets?

Ahmed Nassef: The fact that are watching TV while watching on a second screen as well is s a global phenomenon, but in the Middle East, the opportunity is clear, thanks to three factors:

Tamer Rashad: In a lot of locations, people are also jumping on the network straight from smart devices, without ever using a laptop or a PC, which adds to social interaction.

Rashad: If you look at the statistics, people in the Middle East watch more live TV than in the U.S., where more are watching on-demand or Netflix. People also tend to watch TV in groups, while in the U.S., it’s often an isolated experience.

Nassef: Also, during Ramadan, everyone is glued to the serials that they're watching; it’s a communal experience. In emerging markets, TV is not going anywhere anytime soon.

It's often easier to generate a good social conversation around major TV events, like Arab Idol. How do you expect to generate scale during ordinary shows?

Rashad: One of the issues that we're aiming to solve is this: TV shows are coming up with their own apps. But with tens of different shows, do you want to keep registering on one app and then another, or do you want to go to one place that connects you with your friends?

Is there something particular about the regime change and conflict over the past couple of years in the Arab world that inspired Telfez?

Rashad: I think we've seen how significantly Facebook and Twitter have contributed to recent events in the past few years; people are already using social media to learn what's happening in the news. In Egypt, people rely on Twitter more than they rely on the government news. We want to extend that experience.

Will you offer advertising directly on the platform? And will ads on Telfez complement TV ads, or skim off of the TV advertising market, which, in the Arab world, dominates advertising?

Nassef: The number one thing that we're focusing on is the user experience, so it’s really important that whatever advertising is offered is relevant and interesting to the consumer.

Nassef: Premium is changing as the audience is changing. If a user is interested in a particular piece of content, it might be premium for him or her, no matter how well or badly produced it is. I also don’t think that premium is tied to a particular platform; we're seeing a mass audience for things that are on YouTube, audio, or MBC.

Rashad: In the U.S., a lot of the premium experience is around additional content that you watch after you see the original program, such as “Behind the Scenes” programs; this is also part of our focus at Telfez.

Google Now is starting to offer social information linked to TV shows, but you’ll have to connect your device to the same network that your TV is linked to to get real-time updates. Will Telfez have that issue?

Nassef: Let’s put it this way: if you're watching a black and white TV from the 60s, our technology should work with you seamlessly.

How did working at Yahoo! inspire this departure?

Nassef: I joined Maktoob in 2001, just a few months after it was founded, so my background has always been close to the entrepreneurial environment in the Middle East.

Lately, I was getting that bug again to get back into my startup roots. And this region is such an exciting space. The Middle East, including Turkey, and Africa are not currently a big focus for a lot of international companies, but they will be, because that's where audience growth is; we'll see digital spend multiplying year on year. Tamer and I started discussing the idea for Telfez a few months ago, and, since it combines digital, mobile, and TV, it just made a lot of sense.

Rashad: After working in New York and on Wall Street for the past 25 years, and then in Dubai as the head of Merrill Lynch across Middle East and North Africa, I was thinking, let's build a successful business for ourselves, not for a large corporation.

When will it launch?

Rashad: For now, our focus is on the product. We'll only launch when we have something that is really compelling, when it meets the user's expectation.