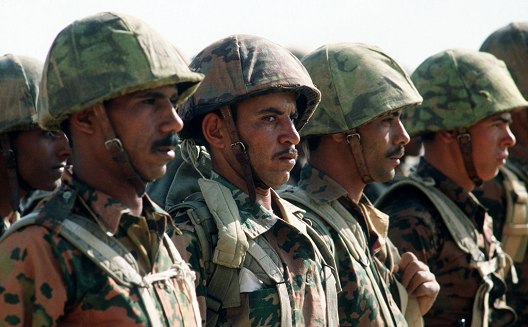 Imagine what the world would be like if Steve Jobs, Bill Gates and Mark Zuckerberg had all been forced to spend three years in the military after dropping out of college, instead of turning their startups into some of the world’s most powerful brands.

Would we have Facebook, Google, and Apple? Would their youthful entrepreneurial zeal, enthusiasm and energy have been tempered or hardened by military duty?

While each of these founders managed to barely miss America’s draft policy for the Vietnam War (especially Zuckerberg, who was born over a decade too late), aspiring young entrepreneurs in Egypt don’t share the same luck. Compulsory conscription is a reality, and one that is hindering or derailing their startup ambitions.

“It is the worst thing ever I have found in my business,” claims 22 year-old Mostafa Hemdan, the founder of Recyclobekia, a startup he founded during his second year of university that collects and ships electronic waste abroad to be recycled. He even goes so far as to say, “this is worst thing in my life.”

In Egypt, all males between the ages of 18 and 30 are required by law to join the military for anywhere between 12 and 36 months, depending on their background, education, and other factors. Often, students postpone it until they finish their studies, but they cannot travel abroad without special permission from the Ministry of Defense.

There are some exemptions from service. For example, if you are the only male child, or all your brothers are currently in the military, you are exempt, for a time. Otherwise, it’s basically “unavoidable,” people say. Despite rampant corruption in Egypt, you also can’t bribe your way out of the military. If you skip it, you are required to pay a hefty fine and barred from things like running for office in the future.

“Every time I travel for business, I have to go to my college to get permission that says I’m a student,” says Hemdan, describing an irritating bureaucratic back-and-forth between his university and the military which significantly delays and disrupts his flow of business, since all of his clients are abroad.

“In the first semester, [the university] said I would travel and stay [abroad] to avoid the military,” explains Hemdan, “and now that I’m in the final graduation year, they say I can’t travel.” He’s now decided to hire an older COO to manage the international travel and day-to-day operations of the company, while he considers enlisting next year, just to get it over with.

Although more than 25 countries, including Norway, Finland, Greece, South Korea, and Turkey, all have mandatory military service, the rising internal and external encouragement of youth entrepreneurship in Egypt, coming from University programs like the American University in Cairo’s Entrepreneurship & Innovation Program and Venture Lab, as well as foreign entities like the US State Department’s Global Entrepreneurship Program, seems at odds with the country’s policies.

But in some cases, they simply can’t. Entrepreneurs say just the prospect of service is making them put their business ideas on hold.

Although they earned a spot as one of 13 finalists in Cairo’s StartupCup for their plan to build a commercial-scale plant that turns organic waste into electricity and fertilizer, they are afraid to build anything more than a small prototype at the moment.

“We will go for our military service in October,” they told me, “so we must wait until after to invest in our product.” They will dedicate the next few months to working on refining their idea, with the help of valuable mentorship and training, but ultimately their final step will be put on hold until after their service.

Ideas, passions, and worldviews  also change quickly in your early twenties; who can say the whole team will be on board after one, or possibly three years of service? Three years is a long time, for both an entrepreneur and a market.

In Egypt’s case, it’s not as if the people don’t support their armed forces, as recent events may have shown. The Egyptian army has, according to recent polls, a 94% approval rating among Egyptians, making it perhaps the most trusted institution in the country. Yet that doesn’t mean everyone should, or wants, to join its ranks.

“Military conscription is simply an immoral waste of human capital,” says Hany Al-Sonbaty, the Managing Director of Flat6Labs, a tech accelerator and incubator in Cairo, who has seen many startups broken up over the issue of military conscription.

The country’s 84 million strong population is one of its greatest assets, the oil of the 21st century, according to AUC’s Dr. Kamel. But how will Egypt choose to use it?

It’s a big question for Egypt and its powerful armed forces, especially at such a pivotal time for the country. It’s also an incredibly complex one.

What does the nation need or value more at this moment, the manpower to maintain one of the region’s strongest armed forces against perceived threats both internal and external, or the human capital to build the engine of a new economy?