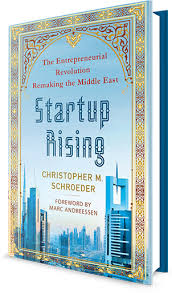 After over three years of traversing the Middle East, interviewing over 150 investors, entrepreneurs, and startup leaders, D.C.-based entrepreneur and Wamda board member Christopher M. Schroeder has written the first comprehensive portrait of the tech startup ecosystem in the region. Startup Rising: The Entrepreneurial Revolution Remaking the Middle East, is available today on Amazon.

A quick, fun read, it’s perhaps one of the few books being published about today’s Middle East for which the Arab Spring is only a fleeting introduction.

Seen through Schroeder’s eyes- those of a seasoned startup veteran- the Middle East is the land of opportunity. After half a decade launching and running online health portal HealthCentral, Schroeder arrived in the Dubai in 2010 to contemplate the next horizon.

His testament to his journey through this complex emerging market reads like a friendly conversation, in which Schroeder manages to warn the West against its own myopia, tour readers through the Arab world’s entrepreneurship heavyweights, and render a wealth of data into tangible opportunities.

Even for those of us already familiar with the cast of characters, the book is still a unique portrait of their backstories and aspirations. As Schroeder reveals Fadi Ghandour’s recollection of his “near-death experiences” while building Aramex, or Samih Toukan’s early inspiration by a bad internet café in London, he humanizes the region’s giants.

He gives equal stage time to the ecosystem’s often “intense” young pioneers, from hardware entrepreneur Hind Hobeika, who’s prototyping swimming tool Instabeat, to Ala’ AlSallal, who overcame the odds to found online bookseller Jamalon, or Mostafa Hamdan, who became inspired to build recycling startup RecycloBekia from his generation’s “outrage” at the status quo.

Again, Schroeder’s candor manages to make a narrative about economics fun; where else have you heard Fadi Ghandour call AlSallal “a pain in the ass, in a good way”?

The book is, at its heart, undeniably earnest. As Schroeder predicts the future, naming mobile, solar, and social networking as regional trends that will define the next decade, he points to the region’s social entrepreneurs and women- from bold lingerie entrepreneur Alex Tohme to quiet powerhouse Randa Ayoubi- as the leaders guiding a new generation of founders towards greater equality.

Schroeder’s most powerful moment, however, comes in his second-to-last chapter: “Religion and the Ecosystem.” He admits that more than one advisor cautioned him against including it in the book. Yet by daring to open a conversation about the role of religion in society, Schroeder provides the reader with a comfortable route into a delicate subject. As he reveals the opinions of several Arab entrepreneurs and investors who he’s already introduced in contrast with the subtle biases of colleagues in the U.S., Schroeder deftly- but unapologetically- invites a cross-cultural dialogue:

“As I share my experiences in the region with friends in the States, I am invariably asked if Islam and sectarian tensions make a thriving ecosystem difficult, if not impossible, in the Arab world. Not one of these same people has ever asked me about how Hinduism in India or Judaism in Israel affects those remarkable ecosystems. Interestingly, the reaction seems selective even toward different Muslim-majority countries. Religion rarely comes up even when I discuss the great growth markets of Turkey, Malaysia, or Indonesia, all with large and rich Muslim populations and traditions. I have never met a venture capitalist who would hesitate to invest in a great individual entrepreneur in the States or abroad due to their faith.”

If his first several chapters of easygoing narrative do nothing else but convince the readers of Startup Rising that this is a conversation to be had openly, the book has broken ground.

For entrepreneurs in the Middle East, it’s not to be missed. Order it on Amazon here (there is also a Kindle version).