“Lack of Confidence, Fear of Failure Hold Women Back From Being Entrepreneurs,” Entrepreneur magazine recently wrote.

Yet a closer look at the Global Entrepreneurship Monitor 2012 Women’s Report reveals that the story isn't as black and white as it might seem, especially in the Middle East. 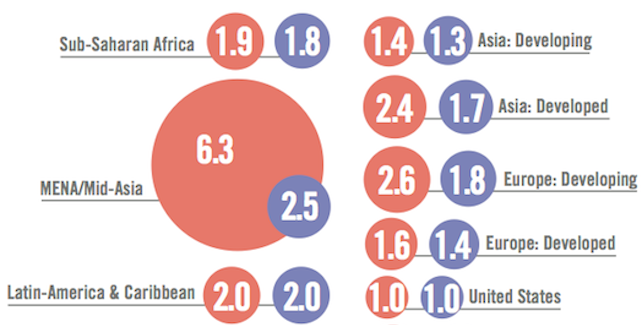 Ratio of Intentions to Total Entrepreneurial Activity (red is female, blue is male)

The report’s writers conclude that this is a negative trend, saying: “Women [in the Middle East/mid-Asia] appear to have trouble converting their intentions into actual starts.”

Yet another equally valid conclusion is that women's intentions to launch a business may have risen more swiftly recently in the Middle East than in any other region. (We'd need more data to determine the underlying cause).

So it's not for lack of interest that women are falling behind in engagement rates as entrepreneurs.

A further look at the data reveals a bleaker portrait, however:

Overall, the report also finds that women across the globe tend to be more isolated; they're less likely than men to know another entrepreneur, and they're more prone to launch a business with a single founder.

The narrative that women need to catch up to men in entrepreneurship, especially if governments want to boost their economies, is nothing new. Yet taking these metrics as definitive indicators for the entire Middle East could be a mistake. For two reasons:

Yet even if these statistics are taken as a portrait of entrepreneurship in the Middle East, it could be dangerous to imply that any of these attitudes are innate to women; this data shows that, if anything, the situation of women in the Middle East is poised for a dramatic change.

The fact that many women don't perceive an opporunity in entrepreneurship speaks to the relative invisibility of businesswomen and entrepreneurs- those in the informal sector aren't registered in statistics, and businesswomen haven't historically received a lot of media coverage. Yet this is shifting quickly.

The fact that a disproportionate number of women intend to start a business says as much: women will be launching more and more companies over the next few years. The World Bank, for one, estimates that 75% of the jobs that will be created in the region over the next decade will come from women.

So, the cultural and psychological factors that inform these gender discrepancies may be complex. But before we decide what's holding women back, it's worth noting that, in the Middle East at least, it's hardly a fear of failure. Women in Arab world know that the path will be tough, and yet they dare to have entrepreneurial intentions anyway.