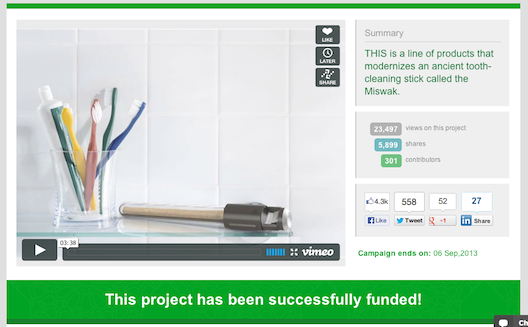 Got an idea so crazy it just might work? You’re in luck: Zoomaal, the Arab world’s only crowdfunding site, is launching its Creativity Competition, sponsored by the international development organization Hivos. Any crowdfunding campaign that begins or ends between October 1st and November 1st will be eligible to win up to $10,000 to put towards the realization of your idea.

If you’re new here, crowdfunding is exactly what it sounds like: getting a crowd (your friends, professional contacts, fans, even strangers) to fund your project, whatever it may be. While anything can be crowdfunded, it’s a strategy usually best-suited to creativity: off-beat, quirky projects that would be passed over by big investors for being too risky. But circumventing the big money guys has its rewards too: the freedom with product, content, and/or editorial that artists need, and that big sponsors usually don’t provide (just ask Mashrou3 Leila).

Building on a previous list of tips from Arab entrepreneurs Hind Hobeika and Ibrahim Khalil, we put together a new list, specifically for people in the creative sector. Wamda spoke to two young Arab entrepreneurs: Leen Sadder, who successfully funded her THIS toothbrush campaign on Zoomaal (raising $18,000 in 58 days), and Esra’a al-Shafei, whose Mideast Tunes is in the midst of its own Zoomaal campaign to launch a few new features, including a public API – in addition to Zoomaal CEO Abdallah Absi – for tips on how to launch a successful crowdfunding campaign.

First, choose the right platform. Projects based in the Arab world are likely to get more traction on Zoomaal than they would on international sites like Indiegogo or Kickstarter, just as a project in America would likely find more support on Indiegogo. Al-Shafei says her first campaign with Indiegogo “didn’t put us in front of the right audiences,” but with Zoomaal “you get in touch with people who care about Arab creativity as much as you do. I feel [with Zoomaal] we have a real shot at getting this project funded."

Set a timeline. Successful crowdfunding takes effort, and perhaps more time than you might think: Mideast Tunes’ al-Shafei partially attributes the failure of her Indiegogo campaign to her being simply too busy to properly attend to it. Entrepreneurs are busy people: if you only have limited time, it’s better to spend it when it will be most effective. Zoomaal’s team recommends saving your greatest efforts for the end, when creating a sense of urgency (a countdown, etc.) will get people excited to contribute at the last minute.

Think carefully about your target markets. Part of the reason THIS toothbrush was successful was because Sadder isolated markets who were most likely to be interested in her product before the competition even began. She figured that her toothbrush, a modern reinvention of the miswak, a teeth-cleaning stick whose benefits were allegedly extolled by the prophet Mohammed, would appeal to Muslim communities familiar with the stick, the environmentally conscious, the industrial design geek community, and her circles in New York who had been hearing about the product for months.

Then, make the effort to communicate – really communicate – with your circles. Especially when funding a design product or music platform, don’t assume you can just circulate a link and the money will start pouring in. Beyond posting announcements on social media groups frequented by members of your target markets (which people are momentarily annoyed by and then forget), you’ll need to send personal e-mails, to friends, family, professional contacts, with information about the project, the video, and a personal note about how much it would mean to you if they were to donate or even pass the message along.

Explain how it works. These messages should also include information about what exactly their donation would entail – with a special emphasis on the rewards. “People are just now getting acquainted with crowdfunding,” says Sadder, so you can't assume everyone will know what it means to give. Offer personalized rewards for everything, Sadder emphasizes, and make sure people know their donations means a free reward before they even visit the page.

Shoot a short, beautiful video that tells a personal story. Your product isn’t personal to people, says Mideast Tunes founder Esra’a al-Shafei, but your story might be. Leen Sadder agrees: her well-produced Zoomaal video, mostly about her background as a designer and the journey her idea took from a design class in New York to where it is today, was a “huge part of the campaign,” she says. The same is true for Mashrou3 Leila’s video for their successful Zoomaal campaign, although guitarist Firas Abou Fakher emphasizes – as does al-Shafei – the importance of keeping the video short. The point is to have something people can watch quickly, and will be impressive and enjoyable enough for them to click share, at the very least.

These are just the ‘tips’ of the iceberg! For much more, check out these documents prepared by the Zoomaal team. Get creative, and good luck!