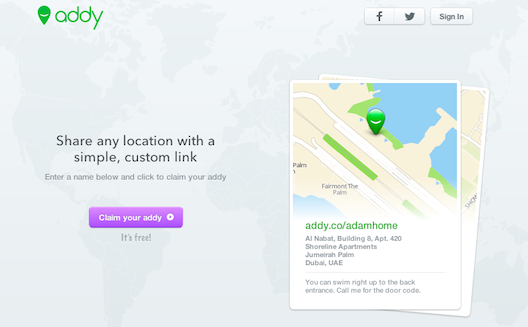 When we last checked in with Addy last summer, the startup was generating buzz after debuting at Stanford’s StartX Demo Day for its simple, map-based addressing system.

Its three founders- Khaled Naim, a Stanford MBA student who grew up in Dubai, David Vetrano, a student who left his Computer Science M.S. to develop the platform, and Mikel Cármenes Cavia, a former software developer at IBM who specializes in natural language processing- were still determining exactly which market the platform would address.

Initially, the founders focused on testing the B2C aspects, inviting people to join and add their addresses to the site by dropping pins on a map. The difference between dropping a pin on Google Maps and adding one on Addy was that “Addies” not only had custom URLs (such as addy.co/wamda), but that an address could be modified as time went on. (Case in point: I’ve moved our Wamda Addy to our new office location; the URL remains the same). Users can add locations on the web platform, by entering addresses or pinning a location, or via smartphone, using GPS.

Over the course of testing during a four-month beta period last year, the founders discovered that Addy was being used in over 60 countries and even at sea, as one used created an Addy for his boat.

Today, over a year later, the trio has decided to focus on B2B integration with local companies in the Middle East. Today, the site is going live in 15 major cities across the Arab world.

The reason for Addy’s new focus on the Middle East isn’t just that Naim grew up in Dubai and knows firsthand how bad addressing systems are throughout the Arab world. It’s also a ripe opportunity for better data processing.

L.A.-based data science startup Factual, which helps companies like Bing, Yelp, Apple, LivingSocial, Groupon, Samsung, and Trulia better understand and track location information, raised $25 million from Andressen Horowitz and Index Ventures in 2010, after a $2 million seed round earlier that year. Yet Factual “doesn’t provide an API for most countries in the Middle East, and doesn’t have a trusted source of data” in the region, says Naim, who chatted with me while eating breakfast in San Francisco.

In Dubai and other cities, Naim and his team have done what Google and other haven’t- they’ve personally mapped out the cities on the ground, according to local landmarks and well-known local reference points.

“We've built our own maps so we can include layers of data that no one else has,” Naim says of the platform, which is created with the open-source software of OpenStreetMaps. When he was growing up, he explains, everyone in Dubai used the Falcon House as a landmark. Now, someone using that same reference point could search for it on Addy and not only find it quickly, but potentially soon receive directions that only reference similar landmarks. “Our maps are built to focus on this use case,” he explains.

A better addressing system is not a new idea, however; the region’s logistics companies already have their own systems, and competitors like are Enwani are abundant. “We’ve come across a dozen competitors by day; there's a new one every couple of weeks,” Naim admits.

But three elements might differentiate the site Addy if leveraged properly: 1) a focus on a user interface that’s so simple that “my mom could use it,” says Naim, 2) its unique algorithm that can describe directions in term of local landmarks, and 3) its focus on building market-specific features, like integrating locations with phone numbers, hopefully improving upon existing ad-hoc methods (and offering a very clear privacy policy).

Addy could also serve its data up to local companies, for instance, offering a heat map of Addy-sharing activity to taxi companies if more transportation is needed in a given area. However, Naim explains, location data would only be shared anonymously in the aggregate.

For now, the company is giving its services away for free (and for exposure) to e-commerce companies, offering Addy as a software-as-a-service (SaaS) platform. If an offline logistics company integrates with its API, Addy would charge, however, likely by location query, says Naim. “We're experimenting with different business models. I can't say that we've nailed it,” he admits; once Addy gets a few major clients on board, it will be in a better position to monetize.

Today, Addy is also announcing that it has raised US $320,000 from angel investors, including some classmates of Naim’s, and The Dorm Room Fund, the student-run investment arm of First Run Capital. Their plan is to raise a seed round next year. “This funding should last us until then, until we've gotten the traction we need to raise from VCs out here [in the Middle East],” says Naim.