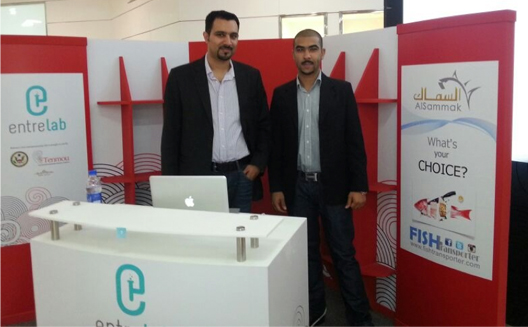 Two Bahrainis, Mohammed Toraif and Sayed Jaffer, are set to launch Fish Transporter in the last quarter of 2013.

As suggested by the name—which was inspired by the Jason Statham action movie “The Transporter”—the business will provide a fresh seafood delivery service on an island where locals take serious pride in their fish.

In fact, my own identity as a Bahraini has teasingly been called into question once or twice for not liking some of the traditional fish curry dishes or fried Safi, a local delicacy!

Twenty-nine year old Toraif—whose father is a fisherman and grandfather was a pearl diver in the pre-oil era when Bahrain’s economy relied primarily on its unrivalled pearl trade—says that customers will benefit from getting the freshest seafood delivered to their door without needing to do any of the dirty work related to cleaning, preparing or cooking the seafood.

The service also supports local fisherman by enabling them to sell their fresh catches on the same day, while incurring minimal expenses and overhead. Fish Transporter will offer all the local favorites from the seas of Bahrain, including Safi, Shi’ri, Hamour, Chana’ad, Shrimps, Lobsters, and Crabs.

Although other basic fish delivery services exist, none of them have the unique combination of Toraif’s fisherman lineage combined with his Computer Engineering degree; and Jaffer’s background in the food supply industry, as well as marketing and finance.

Asked what prompted the idea, Toraif says, “I’ve been noticing recently how much people love seafood, but they don't know how to choose fresh fish. The second aspect I’ve noticed is that they don't have enough time—especially when both parents work. Last but not least, even if they did have the time, most people don't want to do the dirty work of cleaning and preparing fish for cooking,” he points out.

The company allows customer to order online, via a mobile application, or through a hotline, and it offers fish raw, cleaned, cut, filleted- or, cooked into seafood dishes in traditional Bahraini style, and then delivered in branded vans that roam the country.

While some of Toraif’s friends have been skeptical of his venture, his family in particular has been very supportive. “When I told my father the idea, he literally told me: you’re going to make a fortune!” Toraif exclaims.

Jaffer, who is 23 years old, qualifies his business partner’s statement, saying, “According to our online poll, Bahraini families consume an average of 4.25kg of fish per week.”

To mitigate concerns by customers who prefer to see their fish before buying, Fish Transporter offers a money-back guarantee as well as a complimentary order of seafood for any unsatisfied customers.

The company, which is already planning a regional expansion of his business, just received a BD 20,000 (approx. US$ 53,000) investment from Tenmou Bahrain business angels. Both founders are betting that it's not only Bahrainis who can't live without their fish.