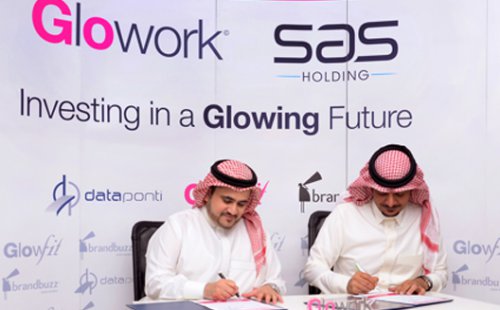 Glowork, the Saudi platform designed to connect women to jobs, has been acquired by SAS Holding, which invested 60 million SAR (US $16 million) for at 51% equity stake; the remaining equity will be divided between the three cofounders- Khalid Alkhudair, Jamal Almansour and Khalid Alsaleh, the company announced on Tuesday.

Of that $16 million investment, which values the company at just under $32 million, $4.5 to $5 million will be invested this year, with the rest doled out over the next two years, says Alkhudair.

The three original cofounders will stay on board to continue running the pioneering company, both by offering offline consulting and connection services, and by operating an online portal that helps women work remotely for companies, either part-time or full time, to comply with segregation laws while having flexibility.

Thus far, since its launch in 2011, Glowork has placed 3,000 women in jobs, with an additional 500 working from home. An estimated 65% of its business is trying to place women in jobs, via offline consulting; the company’s other revenue stream, aside from its online platform, includes its public career fair, which launched this year and will continue annually. Of the 17,000 women that attended this year, 520 were hired locally, says Alkhudair.

Its primary revenue stream is its offline revenue stream; as part of its partnership with the Ministry of Labor, Glowork taps into a database of approximately 1.2 million women in the Kingdom who have registered for Hafiz, its job placement initiative. Glowork is then compensated a total of 2800 SAR (~US $750) for each woman placed in a job, and who remains in a job for an entire year (every 3 months, more is disbursed). Placing women with disabilities earns more.

Last year, the government spent $10 billion on paying out an unemployment allowance to those who don’t have jobs, Alkhudair explains, so job placement is a far preferable alternative. Alkhudair estimates that the job placement market is worth 3.5 billion riyals.

Businesses are also incentivized to sign up for Glowork’s placement services, because every women hired helps the company reach the mandatory level of Saudi employees. Several that haven’t reached the Saudization threshold are shutting down, says Alkhudair. Some businesses even hire women who don’t actually work at the company, but are simply on payroll, he explains, but Glowork connects women to jobs where they can be productive. “Glowork proves that women are actually employed,” he says.

The career fair is a second major revenue stream, as presenters as well as job seekers pay fees to attend.

The company also plans to scale massively within the next two years, expanding into Jordan and Oman, enhancing its services for disabled women, of which there are around 160,000 in Saudi Arabia, launching training workshops, and opening a new chain of women-only gyms in KSA, says Alkhudair.

This fits Glowork, he explains, because “our entire vision is to enable women in the labor market and provide healthy work-life balance. In Saudi, there is not one single licensed female fitness center.”

In Jordan and Oman, although gender segregation is not an issue, “cultural similarities” have created a market for job placement for women, says Alkhudair.

The investment from SAS Holdings will accelerate that process, he says. “Once a month we've been approached by someone who wants to invest in Glowork, or simply take the data that we had and open, say, a fashion design outlet. We held back because we were looking for a partner who could continue with the same values that we had, and also add value.”