The Arab world is no stranger to luggage that's filled to almost bursting. Many travelers return from trips abroad with kilos of purchases and gifts for friends and family; it's also a convenient way to avoid the high cost of shipping and customs, while benefitting from cheaper prices abroad.

Over the past couple of years, two entrepreneurs in Algeria and Egypt have launched startups that systematize the process, making it possible to source good from anyone who signs up, not just family. But is it a business model that can generate revenue? 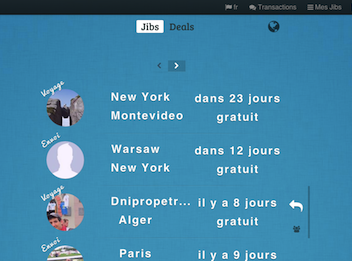 In December 2011, Chakib Benziane and Ryadh Dahimene, two young Algerian computer science students in Paris, decided to attend LeWeb to spread the word about their startup, Jib.li, which allows buyers to post items needed and connect with travelers who post trips on which they are willing to retrieve goods.

After seeing positive reactions at LeWeb, they recruited two other co-founders, including one who invested €75,000 (~US$100,000), and launched in beta, releasing their latest version this past November. 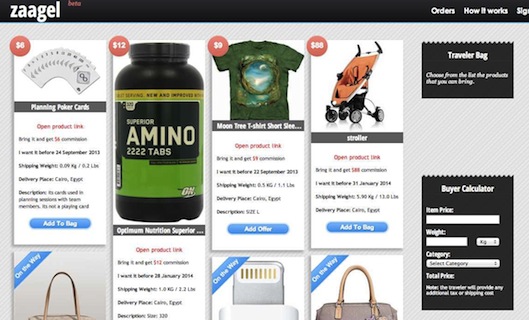 Meanwhile, in Egypt, Ahmed Saad Ismail, Mohamed Nabil Kash, and Mohammed Sameer, three Egyptian entrepreneurs, were building Yadget, at Flat6Labs, the Cairo-based accelerator that's now going regional. After launching a Facebook page to serve Egyptians in need of products from abroad, they put Yadget on hold in March to focus on Zaagel, entering a new round of acceleration at Flat6Labs.

Both sites operate with the same model: the buyer gets the parcel he or she needs, while the traveler gets a commission.

The differences between the two

On Zaagel, the buyer can post a picture and a description of the desired product, with a link to an e-commerce page so the traveler can order it. The buyer also sets a commission, and pays the product and commission fee upfront to Zaagel. The traveler can then buy the product online and send the receipt within three days; Zaagel pays once it's delivered.

While this process is simple, the sign up interface seems a little confusing. For now, products can only be delivered to Egypt, but soon, the service will expand to deliver in Saudi, Jordan, and Turkey. Thus far, most buyers ask for products from the U.S., the U.K. or the UAE.

Jib.li, on the other hand, serves buyers anywhere; it's also more flexible, allowing buyers and travelers to post needs/trip and connect directly with each other, with no financial middleman. Buyers receive suggestions of travelers registered for the journey they request, while travelers can contact buyers or let them come to him or her. Jib.li also allows users to send personal packages, whereas on Zaagel, the item must be purchased online. 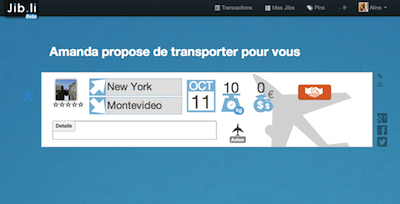 These differences are reflected in the fact that Jib.li is building an international community, with profiles and discussion boards, in the style of Couchsurfing, while Zaagel is more transactional, without an internal messaging system or user profiles. 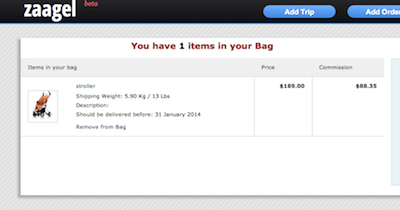 Those differences might disappear soon as Jib.li will offer an option to have users pay ahead of time, and Zaagel will add a communication system. Then, the major differences will be the usability and the culture of each site.

Can these startups turn a profit?

Zaagel and Jib.li are collaborative consumption services that require a large network of users in order to work effectively. Unfortunately, product retrieval is not a well-known practice for most travelers; they'll have to focus heavily on engagement in order to scale.

For now, both services have few users but have decent conversion rates. In over a year, Jib.li has gained 750 users, which isn't much, but they’re really active, says cofounder Dahimene; one-fifth have already completed a transaction.

Of Zaagel's 400 users, 45 have ordered a product and six have carried products, including one who has done two trips, the founders say. All in all, 140 products have been retrieved to Egypt since its launch a few months ago. It's cost effective, says Kash; one traveler makes $500 on average by carrying an average of 30 objects.

Jib.li seems to be focusing on a more socially-minded approach; some travelers have offered to bring products for free on the site, and Dahimene is working on a campaign to distribute medicine in a post-revolution Tunisia.

To scale beyond these sizes, these websites will also have to make their transactions less expensive for buyers than the cost of Aramex and other couriers while still remaining financially interesting for the traveler. They will also need to boost their visibility. SEO could help but will be tough to implement, for now, as only very few people are aware of this possibility, to the point that there's not even a name to describe them. A more feasible option is partnerships with travel agencies, which Zaagel is working on. If they succeed their fundraisings, Zaagel will hire community managers and brand ambassadors at American universities, before organizing a publicity campaign; and Jib.li will launch an app.

Yet in the end, only experience and word-of-mouth are likely to convince travelers that the service is easy to use.

One issue that these startups will face, which plagues other collaborative consumption sites like AirBnB, is that if the platform works well enough, users can decide to bypass the service.

Another challenge that comes up with collaborative consumption companies is the question of whether it's legal. Buyers who ask individuals to carry their purchases can easily (and often illegally) skip paying customs, those very same customs that are responsible for the high shipping costs that charge shipping service in countries like Egypt or Lebanon. Worst, they can hide illegal products against the traveler’s knowledge.

Zaagel and Jib.li give the same response: they’re only a marketplace that should not be taken responsible for their users’ actions. In the future, Zaagel will publish guidelines recapping the different rules in effect in each country. Will this be enough to protect them (and their users)?