Jordan’s Bee Labs is determined to crack the Arab gaming market. Of all of the games that have launched in the Arab world this year, they may just have the best shot with their latest title ShibShib War, a fun and challenging title that might put a dent in a global market. But can they find a revenue model that works?

As we discussed in April, the Bee Labs team initially launched early this year to focus on educational games. Its founders, Tamer Qarrain and Zaidoun Karadsheh, who previously founded Amman-based digital agency Media Plus, and Moaiad Zaidan, their partner at animation studio Sketch in Motion, wanted to build Arabic edutainment applications for kids, to fill an underserved niche.

Yet after launching seven games in the their first six months, they simply didn't find the traction that they were seeking, and decided to apply their animation talent to a ShibShib War, a casual game that focuses on a war with invading aliens. The game, now available for iOS and Android, is building an audience more quickly than any previous release.

Why so popular? A look at the fun gameplay

Other recent games, such as Survival Race and Captain Oil, respectively built by Lebanon's Wixel Studios and Game Cooks, are arguably more creative than ShibShib War. Yet players are going crazy for the game, perhaps due to its familiar gameplay; at first, as some reviewers on the Apple Store have pointed out, it seems similar to Angry Birds.

The game takes place in specific countries in the Arab world, beginning in Jordan, where a sassy protagonist hurls an insulting sandal at invading alien ships. In a series of unlockable levels, the hero takes on these alien ships, against a background of supporting characters and interactive obstacles that have a local flair; at one point, a street sign listing Amman’s famous Rainbow Street can be toppled over to hit an enemy.

Qarrain denies that the application resembles Angry Birds; to him, the game is “totally different”, especially when trying the later levels. The gameplay is a bit different, in that the aliens can fire back (they can't in Angry Birds), and the hero can also use advanced weapons to defeat the alien ships, which crack and smoke when damaged (here, the founders’ animation prowess is on display). In general, it has a less cartoony, more local feel than Angry Birds.

Thus far, it's seeing a very healthy 3,000 downloads a day, mostly from Saudi Arabia, Egypt, the U.S. and Jordan.

While ShibShib War is Bee Labs’ first serious non-educational foray into the global gaming market, after a very simple game called Sheep Run, Qarrain admits that they are really still experimenting to find the right formula. This is particularly evident by the fact that they are maintaining two completely separate game streams: educational and “culturally relevant” games.

Their current focus on a universal title is telling of some of the challenges they’ve faced in meeting market demand; monetization in particular.

“We’re trying every style of revenue model,” says Qarrain, attributing previously low downloads to the paid model they introduced with their first educational games. Now, with ShibShib, they’re trying a lite demo version with the option to purchase the full game for $0.99 (which adds 120 unlockable levels and new weapons).

Despite the traction, it still hasn’t hit the viral download point they were hoping for. “To be honest, ShibShib War is our first attempt, but for me, it’s just the beginning. The next game we are working on is going to be much, much better in terms of quality and gameplay,” says Qarrain. That game will also follow a freemium model with in-app purchases.

As the team uses their own personal funding, and resources from Sketch in Motion and Media Plus, to build apps, they're also looking to outside partnerships, now in talks with MBC and Samsung to advertise and possibly share game revenues.

They're not the only studio to diversify its offering as its chases the right revenue model; as Bee Labs launches a casual game, Wixel Studios is now diversifying into education in order to, similarly, discover what will entice the market. 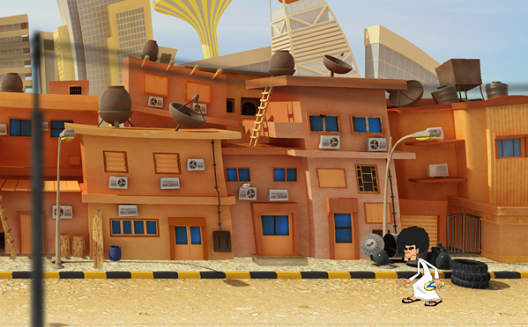 Implications for the industry

“In Jordan the gaming industry was booming, and all of a sudden some of the main companies shut down. I understand that it’s challenging to monetize, but we’re giving it a shot,” says Qarrain.

Perhaps this sentiment reveals some key questions that developers in the Arab gaming industry must ask themselves. Is a specific monetization strategy or strong marketing the key to success? Or is the app itself the most important piece?

Steve Jobs once said, “A lot of times, people don't know what they want until you show it to them." (Yes, I just saw the Jobs movie.) In a sense, this is similar to the old adage, “build it and they will come.” But in the startup world, this is very rarely true, especially in gaming. Sometimes people create a game they would want to play themselves, hoping it will go viral, but nobody bites. Other times people tinker and release several titles quickly, and one happens to take off, seemingly at random; Rovio famously created Angry Birds after 51 other failed apps.

So is there a secret sauce to creating an insanely profitable game? Unfortunately, the answer is no. There are sensible strategies, basic development and gameplay standards, and marketing prowess that can help get you into the best possible position when sharing your app with the world. But, ultimately, the success of that app is in the hands of consumers and proper timing.

Qarrain sums this fact up well, when he candidly admits, “You are funding and investing money into something that is, in a way, gambling because you can’t perfectly estimate or predict what the consumer will be attracted to.”