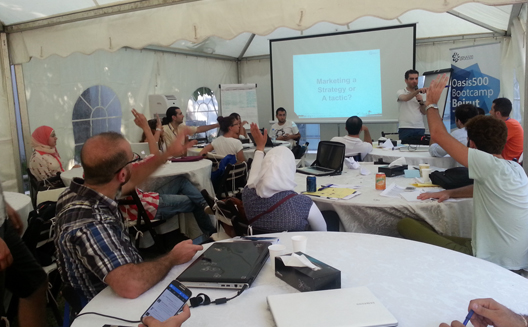 As part of their regional expansion, Oasis500, the region’s biggest startup accelerator, held its second bootcamp outside Amman, bringing 45 entrepreneurs to Beirut this past week.

This bootcamp, which followed Oasis500's Ramallah bootcamp in June, offered entrepreneurs a five day training, with ten workshops, on topics including how to pitch to investors, when to launch, how to share ideas, how to develop a business model, how to build a team, how to market technology, and how to focus on growth.

For the event, held at Coworking+961, Beirut's new coworking space in the Sursock area of Achrafieh, entrepreneurs gathered from throughout Beirut; three also flew in from Syria and one from Morocco.

In general, the Oasis500 bootcamp is the first step that entrepreneurs must complete before they are eligible to apply to the accelerator. In the next week or so, Oasis500 will be holding a pitching event in Beirut to select a few startups for its next round. “If they are all great, we will invest in all of them; if none are, then we won’t,” says Omar Al-Sharif, the marketing manager of Oasis500 who worked closely with the participants throughout the five days.

Al-Sharif was impressed with the crowd attending the bootcamp, and the ideas presented on the tables. “These entrepreneurs are really energetic and have great ideas, and they all did a great job. Some ideas need more development and some are ready to get investment with the potential to grow into the region,” he says.

After speaking with a few entrepreneurs who took part in the bootcamp, we noticed that that agrees on three main elements they learned: how to be flexible, how to handle cash flow, and the power of sharing.

Alaa Chehayeb, a young Lebanese entrepreneur, and former Arabic Editor at Wamda, is now launching a cartoon animation business. “The most important lesson I learned was to be flexible while setting my goals and dealing with potential problems," he said.

"We learned how to do our finances," a basic but crucial part of running a startup, said Firas Wazneh of MenaVersity.

Karim Mnaimneh, a Lebanese entrepreneur who just moved back to Lebanon from Canada to launch a Facebook application for brands, noted that working in groups helped the entrepreneurs to share their ideas and gaining new perspectives on problem solving.

Osman Kudsi, who moved to Lebanon from Syria a few months ago and now works on online dating website Et3arraf, agreed. “I came with the mentality that I would keep my idea for myself, but I will be leaving with the conviction that exposure and taking feedback on your idea from day one is crucial,” he explained.

Faisal El-Fakhani, the client servicing manager at Raghunter, said that one main lesson he learned during the five days is that, "All ideas have potential, but [success] is not about the idea only, it is about the people. No matter what the idea is about, humans behind it are key to its success.”

By taking their bootcamps across the region, Oasis500 working to scale its impacts and push local entrepreneurs beyong their existing limits. “We are trying to guide and mentor rather than teach and preach, giving all the opportunities available out there. If the entrepreneurs take that we would have reached our goals,” says Al-Sharif. [Disclosure: Wamda Capital has a partnership with Oasis500].