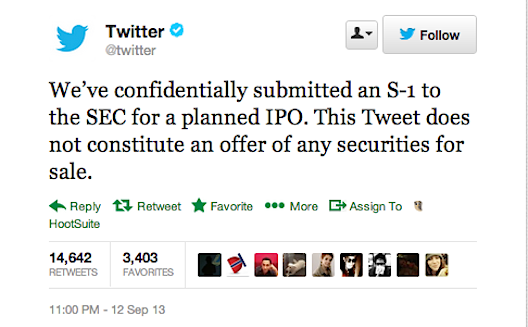 Twitter’s IPO, which it announced last week, is one of the most hotly anticipated IPOs since Facebook. After announcing via tweet that they filed an S-1 with the SEC- the first step to going public- the social network has stirred up speculation across the web that it will be valued at around $14 billion, with estimates ranging from a $9.8 billion valuation, based on investment by GSV Capital, to $16 billion, and stock prices around $26 to $28.

Twitter’s yearly revenues are estimated to be around $500 to $600 million, which has allowed the company to file confidentially under the 2012 Jumpstart Our Business Startup (JOBS) act in the U.S., which allows companies with less than $1 billion in revenue to file secretly. It may have been forced to IPO, as the JOBS act also requires any company to go public if it has more than 2,000 private investors.

Twitter might hit $1 billion in revenue next year, thanks to mobile advertising, but for now, its smaller size is one reason Twitter is unlikely to emulate Facebook’s flop. An IPO valuation of $16 billion would still only value the company at 16x its projected revenues of $1 billion, which looks conservative, says Peter Cohan at Forbes, compared to Facebook trading at 18.3x its sales, and LinkedIn at 23x sales at time of print.

By going public at an earlier revenue stage, Twitter is also likely poised for more growth than Facebook. Facebook CEO Mark Zuckerberg even admitted at TechCrunch Disrupt last week that perhaps he had waited a bit too long to take the company public, which may have added to the hype and overvaluation.

Twitter has also picked a different bank as lead underwriter for the IPO: Goldman Sachs, as opposed to Morgan Stanley, which also led the disappointing IPOs of Groupon and Zynga.

As it scales, however, Twitter will have to convince a broader demographic to join. Right now, it has 200 million users, who are active at least once a month, and send around 400 million tweets every day (an average of two tweets per user per day).

Facebook has hit 1 billion users last year, partly by being accessible to the moms of the world, who are not necessarily joining real-time, news-heavy Twitter with the same enthusiasm. Yes, Twitter been useful during uprisings and times where a hot global news story invites an audience eager for up-to-the-minute updates. But how will Twitter become a more user-friendly medium?

Here are some changes the social media platform is making:

It’s adding media to its newstream. Twitter is already locking down what third-party apps can build, insisting that apps allow users to see expanded tweets, which include embedded media. Mike Brown, Twitter's director of corporate development, has pointed out that the social media platform has to grow beyond a “command line” style functionality. “We have an opportunity to up-level the chatter on Twitter in a photo, video and narrative that helps people understand the story,” he said.

It’s focusing on conversations. Two weeks ago, Twitter adjusted the way that tweets appear in users’ timelines, making conversations appear chronologically, with older tweets showing up linked to newer ones in the same thread. This hasn’t been rolled out for all accounts yet, but it’s clearly designed to encourage conversation rather than allowing comments to get lost in the stream.

It’s enhancing its mobile experience. Once Apple rolls out iOS 7 next week, Twitter plans to release a new app with a completely different interface, that will show more content and less interface, eliminating its “Discover” tab, and perhaps adding new categories: Activity, Trending, and a place to discover people to follow, as its new Android app does. Twitter’s acquisition of MoPub, a “mobile advertising exchange startup,” six days ago, for $350 million, will help Twitter keep better track of its ad inventory in real time, AllThingsD reports.

It will sync up with TV advertising. Just over two weeks ago, Twitter bought Trendrr, an analytics firm that tracks social media engagement, saying that the acquisition ““will help us to build great tools for the rest of the TV ecosystem,” potentially targeting users with related Twitter ads after they view a TV commercial.

As the social media platform builds more walls around its product, boosts up ad revenue, and adds embedded media to tweets, it will undoubtedly look a bit more like a Facebook newsfeed. As Matt Buchanan at the New Yorker points out, the platform may also want to resuscitate the direct message, in order to handle competition from Whatsapp and Snapchat. Here it could also follow Facebook’s lead, by offering a standalone app like Facebook messenger.

By learning from Facebook’s mistakes, Twitter has a lot to gain, perhaps especially in the Middle East, where television is still a healthy source of ad revenue, smartphone use is exploding, yet many of the next wave of users to come online might not be as tech savvy as the region’s current userbase.

Prince Alwaleed bin Talal, for one, won't be selling his shares. He says he sees the Twitter IPO happening in early 2014, and, following his investment of $300 million in late 2011, he won’t be divesting.

What do you think the IPO price will be?