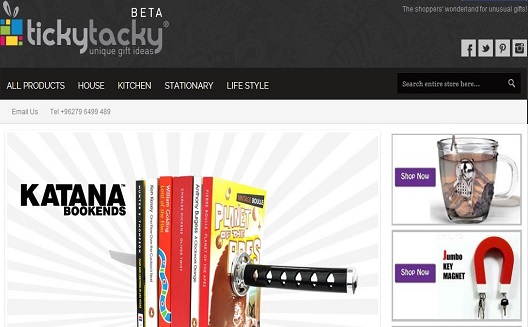 Loay Malahmeh loves funky gifts. While shopping for one recently, he became frustrated with the overpriced products that he found offline, and the long delivery times he would face ordering online. So he did what many entrepreneurs do, and decided to found a company based on his own market needs, one that he calls a “shoppers’ wonderland for unique gifts.”

That’s how TickyTacky, Jordan’s first online gadget store (think Think Geek), was born in April 2013. After taking on only 24,000 JD (US$34,000) in seed funding from a friend, 20-something Malahmeh has managed to bootstrap his way to 1,000 visits a day. Despite hardly having the tens of millions that regional giants Souq.com, MarkaVIP, and Namshi have raised, he's testing out whether lean works for e-commerce.

For the first five months, Malahmeh worked from home. Now, after moving into real offices, along with his cofounder this September, here's how he's building the site, step by step.

TickyTacky offers four categories of products: House, Kitchen, Stationary, and Lifestyle, the latter being the highest selling category, he says, since people like to gift themselves.

The average basket size on the platform is $25, which is decent compared to Amazon’s average order value of $47, dropping to $15 for books, their largest category. (And going niche is one of the best ways to compete with bigger sites like Amazon).

The site features a lot of funky items, such as the Tiny Tim Book Light, a cool battery-like mug that lets you know if your drink is cold or hot, and even an iPad dinner table for busy entrepreneurs who can’t seem to spare time to eat without checking out their site analytics. The prices- mostly below $30- are affordable, yet this also means that TickyTacky likely can't make high margins on its sales, and will be betting on quantity rather than unit price to make a profit.

How he built it

Malahmeh used some of the simplest available solutions for going online, relying on ShopGo to build his online platform, and offering online payment through Gate2play, where offers payment via credit card or a variety of prepaid options. TickyTacky also offers cash on delivery (COD), which is only enabled in Jordan thus far.

Once the platform expands to the UAE, it will enable COD there too. Other Emirati and Jordanian e-commerce companies like Cazamoda and Voga Closet have tried to avoid turning on COD, hoping to reduce its overall use in the region, but 90% of the TickyTackys's orders are paid for with cash, says Malahmeh.

The platform also relies on Aramex's REDe solution for shipping, clearance, warehousing and delivery. Shipping in Jordan is currently free, with products delivered within two to four working days, or two to five working days outside of Jordan. Delivery fees including customs vary from $9 to $22, depending upon the country and the product. While some sites allow buyers to pay customs upfront, TickyTacky, on a limited budget, hasn't turned that feature on yet.

As e-commerce sites pop up around the region, it's still a tough market to tackle. Yet TickyTacky is carving out a space for itself by focusing on four tactics to set it apart:

It's not easy: the challenges of building in Jordan.

His site and approach may be lean, but it's clear that Malahmeh is learning as he goes. One challenge he faces is calculating conversion rate taking into account both Facebook and Google ads; another is selling inexpensive items with high customs rates, that can reach 60% of product price.

Motivating a team of only two can also be tough, but keeping other people around helps the TickyTacky team stay engaged, he says.

It will get tougher before it gets easier, but Malahmeh has a longterm view of the business. “E-commerce in our region is like the longest poker game ever; you’re gambling day and night trying to adapt your marketing strategy according to the conversion rates and to optimize the best shopping experience, as well as avoiding the financial risk,” he says.

Now the race is on to see if they can perservere and become the next Fab-style site for the gift-giving crowd.