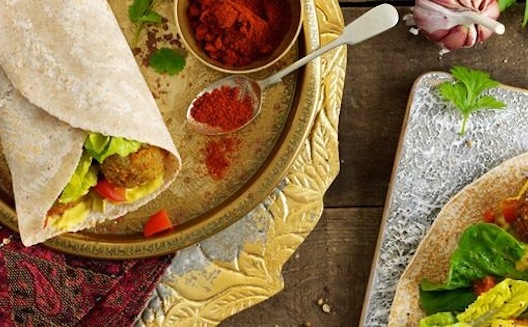 Fadi Malas of Just Falafel is working overtime lately. “We’re finishing work these days quite late, I think around midnight,” he explained when I chatted with him recently.

Perhaps that’s fitting for the CEO of the company that is rumored to be planning an IPO before the end of year, one who just won Gulf Business’s Entrepreneur of the Year (a title he snatched from Cobone’s Paul Kenny).

The restaurant chain, which began with just one falafel store in Abu Dhabi in 2007, might now be considering offering a 25% equity stake on the Dubai Nasdaq, perhaps as early as October.

If Just Falafel goes public, it will be the first listing in four years on a Dubai stock exchange, following the 2009 listing of Drake & Scull on the Dubai Financial Market (DFM), and the first to IPO on the Dubai Nasdaq since 2008. It would also be the only restaurant chain listed on a Dubai exchange.

Malas wouldn’t comment on the IPO rumors, but hinted that more news might be coming soon. Last June, he told The National that going public would be a tactic for boosting the brand's visibility. “It is very important for us, that rather than having a handful of partners, to have a few million shareholders. The only way to achieve that is by taking the company public. For us it's a huge marketing play to go public," he told The National at the time.

Malas, who came on board in 2011, has overseen the company’s meteoric rise since it began franchising the model that year. Today, it has 42 stores operating in six markets; whether you love its multicultural falafel sandwiches or not, you’re about to see more of lot of them over the next… 45 years. The company has now sold 700 franchises around the world, to over 60 different owners. It will open 14 more this year, with the rest rolling out over the next half century.

If its IPO is successful, Just Falafel stands to reinvigorate hope among startups in the Middle East. Its story also stands as a testament to the power of franchising to generate swift growth. To sell such a large number of franchises in the past two years, the company has focused on three major elements: 1) its falafel (let’s not discount the product itself), 2) its location, and 3) its social media strategy.

As for the award, Malas says, "We're very humbled by these awards, and we have to live up to the responsibility [they confer]."

The story of its falafel is one Malas has likely told many times. When asked what makes the company particularly innovative, he recalls its origin story.

“Although falafel is one of the eldest foods of our times, no one had given it the time of day to elevate it and adapt it to a modern lifestyle,” he opens. “The founder, Mohammad Bittar, decided that he wanted to innovate, and he launched the first store with an Indian sandwich, a Greek sandwich, and a Lebanese sandwich.”

Bittar then expanded the kingdom. “He wanted to widen his target audience, and there's a very wide expat community that he wanted to entertain,” says Malas.

Today, Just Falafel has launched a Japanese sandwich, a Mexican sandwich, and even a falafel burrito. Although this customer is often left wishing for less bread and less dressing, it’s easy to see why the sandwiches appeal to a fast food market across the globe; it’s not healthy enough to have lost what matters most: taste.

When it comes to locations, entering mall food courts was a critical part of the equation, says Malas. “Once you're in all of the food courts, the real estate positioning has an element of exposure that gets clients' attention; they're going to have to try it.”

As soon as Just Falafel entered malls, it could immediately market to an area with heavy footfall. Its early adopters were those who “those who would eat a traditional sandwich anyway,” but wanted to find out “what a falafel burger would taste like, even if they had never had one,” Malas explains.

Although Dubai Mall is quite expensive- the most expensive rent the falafel company pays on any of its properties- Just Falafel has been breaking even since day one, doing an average of $2,000 in sales a day, Malas says. (selling around 500 US $4 sandwiches a day, it has been making over $700,000 in revenue a year based on his claim).

Prices for an outlet in the Dubai Mall food court over the past couple of years have been around 1,000 AED per square foot, which could add up to around 750,000 AED (US $200,000) per year for an average 750 sq. ft. space. Add in the cost of outfitting the place and the price of staff, and it’s clear that profits are not large in a mall location, but, Malas says, Just Falafel has been breaking even since it opened. Simply having visibility in a space that sees over 65 million people a year, he says, has helped grow the brand.

Anyone who attended the last Arabnet Beirut knows that a crucial part of Just Falafel’s story is its ability to leverage Facebook. Last fall, the company was able to generate 3,500 requests for franchising opportunities from over 70 countries, by launching a targeted campaign with a franchising app. At the time, each Just Falafel store had around 25,000 Likes each; the company’s main Facebook page has now reached over 1.5 million Likes.

That doesn't necessarily amount to conversions, but Malas summarizes the power of Facebook succinctly: “If you're staying no to social media today, that's like saying no to mobile phone and faxes.” Those interested in the details of their campaign can check out Facebook’s case study.

All three of these elements have helped the company get to where it is today, with over $140 million in commitments from franchisees for new stores. Without franchising, Just Falafel would simply not have been able to grow as quickly. “Today we could not recruit people fast enough who were as committed to the brand unless we worked with franchisees,” says Malas. “We’ve gone from a handful of people with one location in Abu Dhabi to almost more than 500 people working under the brand,” he says.

The majority of its franchises are breaking even, says Malas. From each store, Just Falafel takes around a 6-7% royalty and 3-4% in marketing fees. The average age of its 42 stores is around 13 months, but that “will get much younger,” says Malas, as the restaurant chain looks to double its total number of stores “in the next few months,” including going from 8 to 16 stores in Saudi Arabia, and soon from 5 to 10 stores in London.

Egypt will also be one of its biggest markets; while it has only launched two stores thus far- one over a month ago and a second last week- Just Falafel has sold a total of 100 franchises in the Egyptian market.

Interestingly, among all of its stores, the company itself owns just one right now, located in Mall of the Emirates; the rest- including its initial four in Abu Dhabi and Dubai- have been sold to employees. However, Malas says, the company will also be rolling out proprietary stores in core markets like the U.S., Australia, and the U.K. as it expands.

When pressed for what really sets Just Falafel apart, Malas says that its recipe for success doesn’t involve “any one thing.”

“We try to look out for the next challenge, rather than waiting for surprises. We’ve already made a lot of mistakes in a short period of time,” he explains. “You have to take calculated risk in everything that you do. We make several decisions a day, whether in our location, or our choice of franchise partners… I think going forward, we need to continue making the right decisions.”