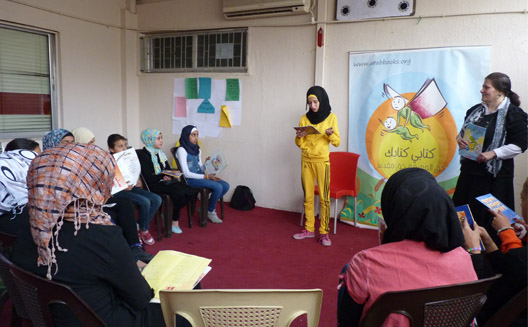 Very few initiatives originating in the Arab world achieve international recognition: Kitaby Kitabak (my book, your book in English), a Jordanian cultural initiative for building public libraries for deprived youngsters, is one of these.

During this year's Goteborg Book Fair, the Kitaby Kitabak initiative was named the most inspiring international success story of 2013, in the Cultural Initiative Encouraging Reading category.

Reading is not a top priority for people in the region, especially when it comes to encouraging youngsters to read. Kitaby Kitabak founder Hanaa Al Ramly, a Palestinian living in Jordan, was inspired by her personal experience in launching the initiative. "Being a mother,” she says, “I really wanted to raise my children to be good readers and to be passionate about knowledge, so I built them their own children's library." When her children grew up and moved to Canada and Australia for college, she decided to put these beloved books to good use.

Al Ramly first launched the initiative on Facebook in 2009, later building the first Kitaby Kitabak children's public library in one of Jordan’s Palestinian refugee camps, a notoriously poor and deprived area. The launch event included a party with more than 500 children in attendance, a puppet show, a musical performance, and a signing event with a children's book author.

Shortly thereafter, Al Ramly managed to transform the original initiative into a more organized volunteer-based project. "Today,” she elaborates, “we are a registered cultural society carrying the name of the initiative, and we are almost done with our 30th public library." The initiative currently has more than 1,000 volunteers in Jordan alone, and operates public libraries in a wide range of countries throughout the region including Palestine, Lebanon, Yemen, Egypt, Qatar, Saudi Arabia, UAE, Kuwait, Algeria, Tunisia, Libya, and Sudan.

Although being one of the most internationally recognized, Kitaby Kitabak is not the only cultural initiative like this in the region. The Middle East has recently witnessed a number of entrepreneurial activities aimed at encouraging people to read more and be more culturally aware, such as Egypt’s Culture Corner initiative. However, Kitaby Kitabak differs in its targeting of children and youth. 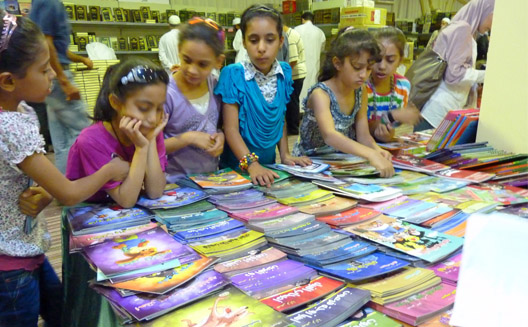 Al Ramly faced many obstacles along the way; people mocked the idea of supplying poor and deprived children with books and knowledge rather than food and clothing, but Al Ramly remained steadfast. "I was totally convinced that knowledge, libraries and books are as essential as food," she insists.

Kitaby Kitabak has faced significant financial obstacles as well. Al Ramly insisted on bootstrapping her startup; only books were accepted as charitable contributions. While the initiative still operates without a budget, the Kitaby Kitabak team recently organized a fundraising event in Jordan featuring the Lebanese poet Zahi Wahby and the Palestinian artist Reem Banna, to cover some of their operating costs.

The Kitaby Kitabak initiative has sent representatives to a number of international cultural exhibits, like World Volunteer Day and the Sfax International Children's Book Fair, where it received praise and recognition.

Al Ramly has big plans for the future. While Kitaby Kitabak occupies much of her time, the Jordanian entrepreneur is also working on another project – Internet Sun - Internet Birds – aimed at enabling orphaned children to use the internet as a media outlet. Asked what she’s most excited about, she answers: "I look forward to updating our current libraries, and we are also working on an innovative reading competition for children and youth in Jordan and the Arab world. I hope to generalize the Internet Sun project in all those public libraries."