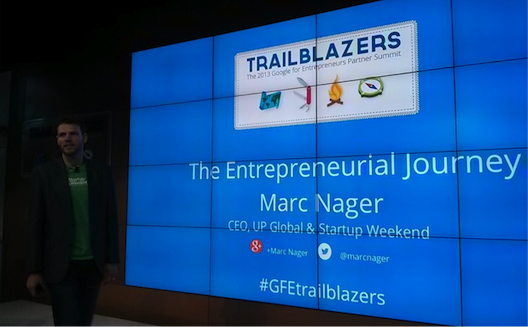 Two weeks ago, Muhammed Mekki and I participated – as AstroLabs – in the first Google for Entrepreneurs Partners summit, a two day event meant to gather all entrepreneurship development programs that Google supports globally. Programs such as Startup Weekend/UP Global, General Assembly, Blackbox connect, and a handful of local initiatives in the Middle East such as Wamda, AstroLabs, CoWorking +961, and Flat6labs.

The summit took place at the Google Partnerplex in Mountainview, CA and included about 70 leaders of the partner organizations. During the two days the program included presentations and discussions by major Silicon Valley VCs, executive leadership members at Google and leaders of some of the partner organizations. Muhammed and I also presented about entrepreneurship in the Middle East and our Scaling Online Startups program.

10 lessons in building a startup

Laszlo spoke about Google’s approach to managing its talent, from recruiting to performance management and retention:

1. On Hiring: “Only hire people better than you.” His advice was that any compromise on the quality of talent added to the company will end up hurting the organization either in the short or long term.

2. The recruiting process: “If you try someone and it doesn’t work don’t consider them dead to you.” There will always be a future opportunity to approach them again for the same startup or another organization.

3. Managing talent: Be sure to discuss sources of frustration. “The main sources of dissatisfaction are: manager quality, performance relative to peers, being passed-up for promotion. So make an effort to have a thorough conversation with team members who were not promoted when their peers have been."

4. Retention: Keep team members motivated. “I ask my team members to go interview with someone else every six months so they are reminded why they work here and when things get tough they know they are here because they chose to not because of a decision years ago.”

Bock also mentioned two books on the management philosophy at Google, both coming out in 2014, one co-written by CEO Eric Schmidt (called No Adult Supervision Required: How To Build Successful 21st Century Companies).

For the really interested, here’s a video about Google’s OKR method as presented by Rick Lau from Google Ventures during their startup Lab session. (OKR stands for Objectives and Key Results; it’s the method Google uses to inspire and manage high performance)

6. Starting up: work for someone else first. When Stanford University engineering graduates approach him, he advises them to start their career at a larger company “go work on it (the idea) on somebody else’s nickel.”

7. Fundraising: “Be ruthlessly honest about where the risks are and work on eliminating those risks. This is how you get valuation and ownership, not through negotiation.” The point here is about phasing the funding round so the earlier ones are the smallest but focus on eliminating the larger questions about the business. A discussion point that came up in the Wamda Mix n' Mentor sessions in Beirut.

8. Scaling: Bring in a CEO when you need one. In many cases, Doerr pointed out, it's necessary to bring in a CEO, since the founders do not have the capability or passion to run operations. His advice to the Google founders was to bring in a CEO and everyone was satisfied about how well the dynamic between Larry, Sergey, and Eric Schmidt worked out.

One anecdote here is that when John was convincing Larry and Sergey that they needed a CEO, they decided to go speak with some of the top CEOs they knew, and they came back to him saying “The good news is we are convinced that it makes sense, but we believe there’s only one person in the world that can come in as a CEO, Steve Jobs!”

He also recommended some books that can be taken as a lesson:

- Swimming Across: A memoir (By Andy Grove)
- High Output management (also by Andy Grove)
- The Everything Store: Jeff Bezos and the Age of Amazon (By Brad Stone)

The last two lessons are from Bill Maris, the managing partner of Google Ventures. Bill shared a lot of interesting stories from meeting Sergey Brin in the early days, to his startup years and Google Ventures investments. Two of his notes stood out:

9. Always look to do the next thing that you are “totally unqualified to do.” That’s what Maris is enjoying doing at Google Ventures now. In his early days, he described starting a hosting business by buying a few web servers and reading the manuals about how to make them host websites, a great lesson about trying something new that you might be at first afraid of doing.

10. Stay focused on doing what you do well. When Maris was running that hosting startup in Vermont, he felt jealous of competing companies in Silicon Valley getting a lot of press and a lot of funding and building many data centers. But that this turned out to be a blessing, he explained, since he was more disciplined about running the company, operationally and financially and focusing on the right priorities.

A few other interesting tidbits:

The AstroLabs next Scaling Online Startups program is in Jeddah next, interested startups can apply at www.astrolabs.me.