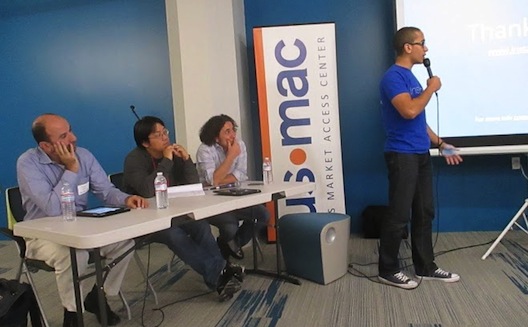 Despite the instabilities at home, Egyptian startups are gaining global recognition for their innovations lately; it’s not just that Instabug was chosen as a finalist in The Next Web’s Mobile Startup Rally and Integreight won the Audience Choice award in the Arabia Pavilion at TechCrunch Disrupt; startups from the banks of the Nile also won a recent pitching event hosted by TechWadi and PALinnO, a new Palestinian startup support organization last month.

The October 17th event, which showcased eight startups, from Oasis 500 in Jordan, Flat6Labs in Egypt, KAUST Venture Lab in Saudi Arabia, and PALinnO, was designed to connect startups in the Middle East with potential partners, customers, and investors in Silicon Valley. TechWadi’s previous events have brought startups to Silicon Valley, but this – which also involved US-MAC and PITME Labs as organizers – may be the first to include a comprehensive group of companies from the entire region.

Instabug is a tool that runs in the background of an app, allowing users to send their feedback or report bugs instantly, by simply shaking their devices.

Jamalon is the largest online bookstore in Middle East, offering more than 9.3 million titles of Arabic and English books with home delivery and customized payment methods suited to the Arab region.

Braci is a smart bracelet that alerts users to everyday sounds and emergency alarms by vibration and LED lights, in coordination with the use of a smartphone application.

Souktel is a mobile phone service that link people with jobs and connects aid agencies with communities who need help.

iDive was developed in the Red Sea Research Center at KAUST to provide scientists with better ways to record data while scuba diving.

Eshtery is an online shopping platform, consisting of a mobile app and interactive virtual store that allows shoppers to use QR codes to purchase goods online.

“Bringing together ambitious startups from Middle East and showcasing them to Silicon Valley investors and mentors goes along with our efforts at PALinnO to empower and bridge entrepreneurs from the Middle East and Palestine in particular,” explained Michal Zalesak, PALinnO’s Executive Director.

“We hope to keep organizing similar events in the future with investment offers to startups and more opportunities to support this region’s innovation and entrepreneurs,“ said Akram Dweikat, the event’s head organizer.

“It is always great to give the region’s most exciting entrepreneurs the chance to connect to the community in Silicon Valley.  The entrepreneurship ecosystem in the Middle East is quickly expanding and the Arab diaspora has a role to play in enabling success stories,” said Mohammad ElBibany, the Program Director at TechWadi.