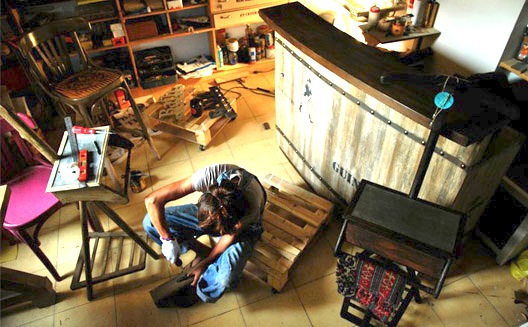 "I love the texture of wood, and the random patterns within the grain," says Maha Shoukry, a half-Egyptian, half-Italian entrepreneur who breaks the mold by being the only well-known female carpenter in Egypt.

Shoukry runs her own "made to measure" furniture factory in 6th of October City, a suburb of Cairo. Based on her nickname, Papousa, she launched her own brand, "ByPapousa," two years ago, which has become popular for pieces that combine traditional elements with a contemporary look.

Before launching out on her own, Shoukry began casually designing items for friends, and then working for large-scale commercial properties. For ByPapousa, she now makes individual furniture pieces, including chairs and dining room tables, which are often made-to-order. "We are not an interior design company, but we take the time to understand each client and the tone they want to create within a specific space," says Shoukry.

Egypt is already renowned for its classical furniture factories that produce a variety of traditional designs. Yet with a unique mix of old and new, Shoukry has built up a client list that includes families with vacation homes, expats living in Cairo, newlyweds, youngsters looking to update their bedrooms, and families updating the theme of their homes.

Ironically, the political instability in the Egypt seems to have boosted her business. "After the revolution, I have found that people are taking more time to decorate their homes, as they are hosting more and more as an alternative to going out," Shoukry says. 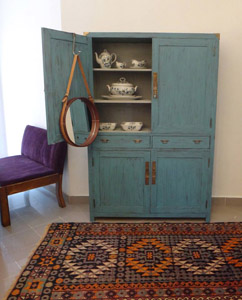 Her journey towards becoming a female pioneer in Egypt

It's clear that Shoukry is not a typical entrepreneur in Egypt. With an Egyptian father who worked for the United Nations, she grew up in Pakistan, Geneva and Rome. Then, after marrying an American, she lived in Singapore and the Philippines, before finally settling in Marbella, Spain. "My travels have fine tuned my taste," she explains.

In Spain, Shoukry took numerous art courses, especially relishing carpentry. "My passion and drive were evident enough that my teacher invited me to work in his workshop, where he created items for many homes in Marbella. This became what I looked forward to doing each and every day," she explains.

When Shoukry returned to Egypt in 1999, she began building unique furniture items for her own home in a small studio. As her work gained popularity by word of mouth, she scaled her business to what it is today; at ByPapouza, she now employs a team of seven people, including her daughter, Kenzie, who runs the business with her as a co-designer.

It hasn't all been easy, however. Business has grown steadily, and yet some of Shoukry's biggest challenges as an entrepreneur have had to do with being a woman. "I would go to the wood merchant myself, and because I was a woman, the prices quoted were very high." Her male factory manager now takes care of haggling for raw materials; however, Shoukry struggled in general to find reliable people she felt comfortable working with.

While she wouldn't share details about ByPapouza's revenues, she describes the business as "a very young venture that's running ahead steadily," and hopes to begin exporting her products soon.

"I would like to gain more publicity, and maybe even collaborate with others, as two minds are better then one, she says, explaining that she plans to export "initially to the Middle East, and then hopefully worldwide, to encourage and spread Egyptian talent."

Shoukry already stands out as a pioneer; if she executes her vision, she'll pave the way for other local entrepreneurs- especially women- to build powerful offline brands that reflect Egypt's past and its future.