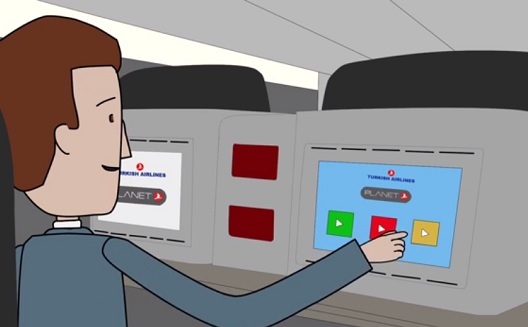 Before selecting an old episode of Friends as in-flight entertainment on your next international flight, Turkish Airlines, in partnership with investment marketplace Etohum, is giving passengers the option to play their own version of Shark Tank and view startup pitches up in the air.

But the program isn’t just another form of entertainment. Titled ‘Invest On Board’, the initiative offers interested flyers the chance to invest directly into any of the preselected startups on screen, reports travel publication Skift. Touted as a program for “Business Class” flyers, the videos will presumably be available in Economy Class as well – people in less expensive seats should also be able to recognize a good opportunity when they see one.

Although full details haven’t been revealed as of yet, partner Etohum is expected to run parts of the program including collecting applications and selecting the pitches to be featured. With 11 video pitches on the website so far, each company – all of which are Turkish at this point – has just a few minutes of, well, air time, to share their pitch. So far the date to launch the platform and incorporate videos into seatback screens is unknown, but it will be interesting to see how they organize the model.

After watching a few, it's clear that there is large room for creative improvement here; all of the videos are edited in a similar and rather corporate style, complete with green screen backgrounds, Turkish Airlines branding and strange airplane transitions. They also don’t ask for particular funding amounts or offer any specific terms.

If the program later offers up the ability to craft your own creative pitch and post it on the platform, that may be a home run. A dedicated in-flight crowdfunding platform might also be a cool idea in the future.

This trend of spicing up airline travel, despite the fact that closer seats are making it less and less comfortable, is echoed in Virgin Airlines’ recent viral in-flight safety video, among other comedic safety videos. With Turkish Airlines opening up a new route for entrepreneurs to actually receive investment, the potential for "Invest on Board" to have impact is much greater than your average in-flight entertainment. We haven't heard back from Etohum, but we'll let you know when they answer our questions about the program's execution: How will investors select a company? Will they seek equity? Is there an investment pool they all join to share equity? Can someone actually invest in-flight?

For now, check out their introduction video below (will any other regional airlines follow suit?):