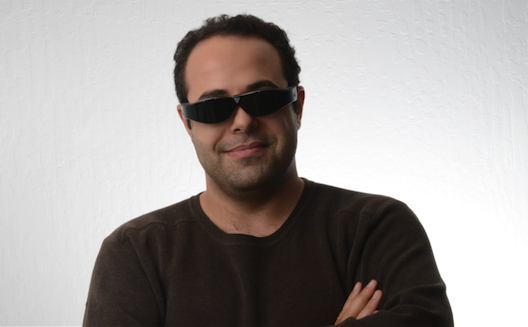 Move over, Google Glass. A Lebanese entrepreneur and his cofounder have just debuted a pair of wearable glasses that displays augmented reality in three dimensions as opposed to Google’s two.

The glasses, built by Soulaiman Itani and Allen Yang at Atheer Labs in Mountain View, bring fantasies to life, allowing wearers to exercise with virtual targets, conduct conferences calls while browsing data online, and play three dimensional games, thanks to hand sensors and an advanced algorithm.

Those who were wowed by Pranav Mistry’s TED Talk about Sixth Sense technology will likely go gaga for Atheer, which also offers a 65 degree field of view as opposed to Google’s 12 degree frame in the corner of one’s view.

Today, it’s available on Indiegogo, for only $350; all it’s missing is precognition.

With a lightweight design and integration with Android such that it runs any and all Android apps, the glasses are designed for the everyman, founder and CEO Itani explains. While Google’s SDK allows developers to build apps for Google Glass, Atheer allows the million or so existing Android apps to function already within its platform, without any further work. Yet the company also has a custom-built SDK for those Android developers who do want to take advantage of its 3D functions. This, Itani explains, allow users to create virtual objects that they can leave in their environment or send to another location.

The only drawback, as Nancy Gohring at CiteWorld points out, is that Atheer’s glasses have to be physically attached to an Android device to work. This was a careful decision, however, Itani confirmed to Wamda, because batteries would make it too heavy.

“If the device is more than 100 grams, people wearing it will have a headache, just because of the weight on their head,” he explains. Without a wire, he says, “you have a choice between something with a very small battery, or something that gives people a headache.”

Atheer decided against a wireless device for four reasons, he says. When the company looked at headphones and earphones, those with wires were more popular because they were lighter, cheaper, and higher quality, and also didn’t require electrical maintenance- “people don’t want yet another thing to charge in the evening,” he says.

Yet to think that the hardware is Atheer's biggest differentiator is to miss the power of its software breakthrough. Hardware, in fact, may not be Atheer’s end goal. “We are mainly a software platform,” Itani told Wamda. “We are creating the hardware because there isn’t any appropriate hardware out there currently,” but potential partnerships with hardware companies are in discussion.

From Beirut to Silicon Valley

Itani, who graduated from the American University of Beirut in 2004 with a degree in computer and communications engineering, left Beirut after graduation to complete a Master’s and PhD in electrical engineering and computer science at MIT in Boston, where he focused on the mathematics related to unmanned aerial vehicles, like the quadrotors in the famous James Bond theme video.

He went on to do a postdoc at UC Berkeley in cancer research. “It seems very logical, right?” he jokes. Yet, he admits, what ties his endeavors together- whether studying how to make a robot land on a wall, modeling the behavior of diseased cells, or to positioning a virtual object, is a passion for abstract mathematics.

Itani was struck with the idea for Atheer while working on cancer cells in his postdoc. “Once I was able to create a button floating in the air and I could click it, I wrote a business plan and things accelerated very quickly.” A colleague at Berkeley recommended Allan Yang as one of the top three researchers in computer vision. Itani met Yang, and it was partnership “at first sight.”

Advice for entrepreneurs from the Middle East

It’s obvious chatting with Itani that he’s warm, passionate about building an inclusive environment, and more than willing to help any entrepreneurs from the Middle East who make it across the pond to launch in Silicon Valley.

It's important to “start early and take a lot of risks," he advises entreprenerus. " Then time is with you. If you start earlier, it’s ok to fail. The later you start, the more difficult it is to fail, because the stakes are higher.”

He also advises founders to build a diverse team. “At our core is the fact that we are very diverse, in terms of age, background, and education. We have an MD, a patent agent, we have a guy who has a Master’s in space architecture- how cool is that?” he asks.

So will Atheer be able to beat out Google? “We have a very different approach,” Itani says. “But our competitor is not the current version of the app. We believe that in the future, Google and others will create systems that are closer to what we’re doing, creating full systems that involve hardware and software. We believe that this is the future, and we are preparing for that competition.”

After all, he says, “it’s important to aim high and enjoy the journey."