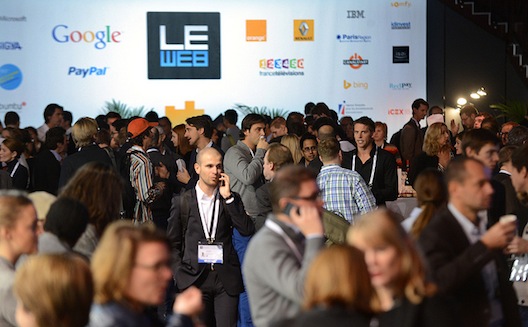 That was the theme of LeWeb, Europe’s largest tech event, based in Paris, for its 10th anniversary. While everyone kept reminding each other that we can’t predict the future, speakers and participants alike went ahead with their prognostics during the three day conference.

Here are five themes that got people talking on stage, during press interviews, and in line at the buffet.

Those everyday life objects (glasses, watches, bracelets, thermostats, cars, etc.) that can be controlled via or connected to the internet, were all the rage.

On the main plenary, Loic Le Meur hosted Tony Fadell, founder and CEO of Nest Labs; on the second plenary, Beirut-based Hind Hobeika, creator of Instabeat, the smart swimming goggles took part in a panel on startups in the Arab world, and gave a seemingly endless series of press interviews. In the main room, the France-based Laster was demonstrating its augmented reality glasses that it developed before the Google Glass.

Still, my favorite connected product was Mother, the latest creation of Rafi Haladjian, the man behind Nabaztag rabbit, which can connect any object to the internet, and manage it through one only monitor, Mother. Check out the speech he gave at LeWeb:

At the other side of the spectrum stands ephemerality. While connected devices track everything and store as much data as possible, data produced with services specializing in ephemerality is designed to disappear. Almost all speakers had a word to say about ephemerality and its poster startup SnapChat. Loic Le Meur tried to get Chris Daniels, VP of Business Development at Facebook, and Bradley Horowitz, VP Product at Google, to talk about it; social media guru Gary Vaynerchuk went on extensively about SnapChat; but if there was one talk to watch, it would be the discussion between Le Meur himself and Nick d’Aloisio.

The conversation between d’Aloisio, the 18 year-old tech wünderkind who sold his startup Summly to Yahoo! for $30 million USD a few month ago, and his was certainly one of most hotly anticipated talks of the 2013 LeWeb. Still, it seemed like people weren’t all that interested in hearing about the $30 million USD deal, or meeting the entrepreneur who made it happen; they just wanted to gawp at the teenager. The audience got their most-awaited answer: yes, all teenagers use SnapChat, even d’Aloisio.

D’Aloisio reminded us that humans generally forget conversations in between one and 24 hours that follow, and we don’t necessary want to remember everything we say or hear. Thus, he concluded, ephemerality and SnapChat were more natural services than others that pile up texts and data.

A nice read if you want to know more: Nick d'Aloisio: Yahoo's teen star on the digital future.

Should you be on all social media? Should you post once, twice, or seven times each day? Well, a lot of major entrepreneurs and social media experts concur: if it’s a given that you’re going to piss off some people, you might as well reach as many as possible.

In this invigorating talk, Guy Kawasaki, author of the must-read The Art of Start, explained that he posts each of his tweets four times, eight hours apart to reach all of this followers across the world.

No, we're not entering a new financial bubble, we're in an entrepreneurs bubble, said Gary Vaynerchuk, entrepreneur and author. Everybody wants to be an entrepreneur whether or not they have it in them to become a successful one. “People think it's easier than it is,” he says, adding that “the first taste of adversity they get, they crumble.” He goes on saying that investors – at least in the US – fund ideas without paying attention to whether the guy behind the ideas can deliver. “I don't bet on the horse, I bet on the jockey,” he concluded.

This is something many participants agreed on.

This was quite an unusual talk that you should definitely watch, especially for Vaynerchuk’s comments on sharing and privacy:

For once, it wasn’t the Silicon Valley that got people talking at LeWeb; rather, people got worked up about developing markets, especially China. Coincidently, this is what Loic Le Meur and Hugo Barra, former Google VP for Android and now Vice President for Xiaomi Global, talked about. Showing little interest in Android, or Xiaomi, all Le Meur asked about was opportunity and China, and how this mysterious market works.

A nice read if you want to know more: The astonishing numbers of Xiaomi, mobile, and e-commerce in China.

Hear everything that the speakers had to tell about Bitcoin, the future of the cloud, the crowd, privacy, the NSA, and VC trends on LeWeb’s YouTube channel.