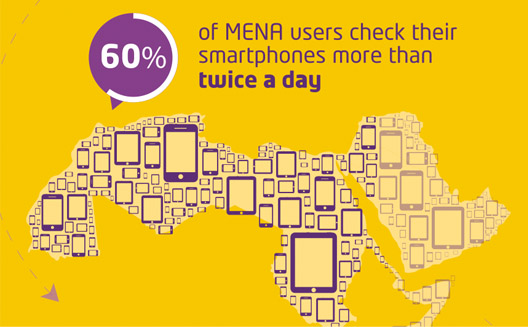 With more than 366 million mobile phone users in the region, penetration rates and usage data are attracting more attention every day. Mobile phones now play a vital role in every aspect of our lives; there are also an increasing variety of opportunities available to entrepreneurs to get the most out of them. New focus on mobile phones in marketing and advertising campaigns, something that was neglected by 87% of marketing agencies only two years ago, can make a big difference in startups’ success.

60% of smartphone users in the Middle East and North Africa check their devices at least twice a day; 46% of those use their phones to obtain information on products and services they intend to buy.

The following infographic, published by Saudi marketing and communications company OTS, highlights the attachment between users and their mobile phones, and the vital role these phones play in people’s everyday lives, showing how mobile phone users should be an essential target for marketers.

According to the infographic, mobile phone users in Egypt are the most attached to their phones, followed by Saudi Arabia. This is contrary to what you might expect, given that Saudi is the country with the highest smartphone penetration rate in the world. Fifty-four percent of users in Egypt said they would not mind giving up their personal computers and using their smartphones instead; 35% of users used their smartphones instead of a television.

Regarding mobile optimized websites, 24% of mobile phone users in the region used their phones to browse online websites of the companies they deal with, more than half (57%) of those surveyed said they would not recommend a company if it had a poorly designed mobile website.

Mobile optimized websites are not the only tools available for marketers to target mobile phone users; SMS is still considered an effective marketing tool. Statistics revealed that 99% of SMS messages circulated in the region are read within 3 minutes of being delivered, companies in the region have achieved a 40% increase in revenues after adopting a successful SMS marketing campaign.

Electronic advertising spending in the region is expected to hit one billion USD by the year 2017. An increasing fraction of this amount will be directed to mobile advertising, which makes infographics like this all the more useful.