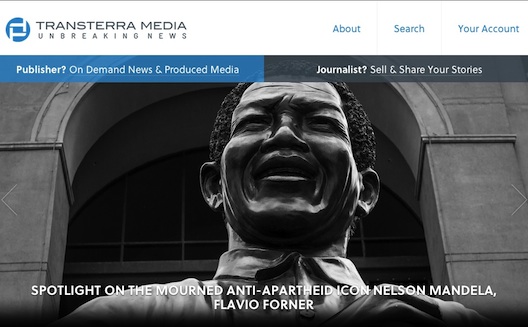 This piece is part of our series on expat entrepreneurs.

As we wrote in October, Transterra is one of the latest global startups to come out of Lebanon. Following on a growing global trend, the platform matches independent professional journalists around the world with publication outlets, in two ways: contributors send their work to Transterra who then sell it to the media; or an editor requests particular coverage and Transterra reaches out to its contributors.

What sets Transterra apart is the automation: thanks to extremely complete journalists’ profile – which include ranking based on their previous experience, expertise, and price line – they can easily find a match for an editor’s request. A similar mechanism exists on the buyers’ side, where media’s profiles list the different formats they’re looking for and other technical preferences.

Thanks to this automation, matching a freelancer and a media takes, and something six and 12 hours and takes between 15 minutes and two hours of human time per story depending on the complexity of the piece – which are mostly photos and videos.

Another unique factor about the company is that it relocated from the U.S. to Lebanon, an unusual move, but perhaps less in today's global economy. To understand what motivates expat entrepreneurs, we wanted to know more.

Over a Skype call, media producer Jonathan Giesen explains, “Let me be honest, starting a tech company here in Lebanon with the bandwidth constraints is pretty difficult. If you’re tech heavy and you are media heavy, it’s probably one of the strangest places to launch.” So why would he move there?

Well, among Giesen’s business partners back in 2009 when he co-founded Transterra (along with Eli Andrews) out of New York City was a Lebanese woman who brought in developers from Lebanon, which led them to move to Cairo in 2010.

At the same time Jonathan started looking for investors and secured a first $300,000 USD round with private investors in Lebanon. At this point, the company was basically Lebanese, says Giesen, so they moved to Lebanon.

“It’s a heck of a lot more difficult to create a startup in Lebanon than in the U.S. or France,” says Giesen, listing the difficulties: from terrible internet to legal hurdles, outdated investment laws – they haven’t been changed since 1982 – defiance to foreigners, and general lack of infrastructure (including daily electricity cuts).

But, “it’s doable if you have the determination to do it,” he continues, later adding three other requirements: the money, a good generator, and a fast-as-possible internet connection.

Still, he would definitively move to Lebanon again if he could do it over, and here’s why:

But as Transterra grows and looks to attract international investors, it’s getting tougher. For a European or Silicon Valley VC, even for a Dubai VC, “it’s business suicide to work from Lebanon.” Convincing them otherwise is tough. Sources told us that Transterra went through a rough patch for part of 2013, before they secured a $1 million USD investment.

At the end of the day, moving to Beirut comes down an analysis of what your product is, what your startup needs, where your market is, and the stage at which your startup is. If you’re a good entrepreneur with a good team and a good product, you will manage to make it in Beirut, and to convince investors, and then you’ll only be left counting the benefits of working from Lebanon.