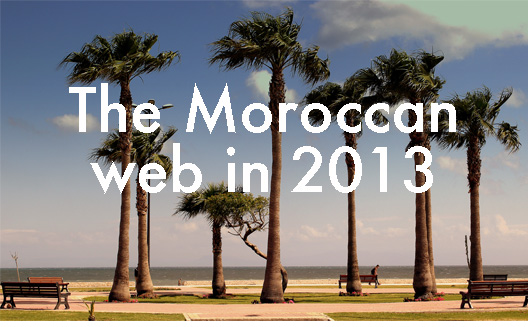 With 2013 behind us, we can now take a moment now to reflect on all the online initiatives, cultural, and technological developments that marked Morocco’s year in web.

If Moroccan internet users used to be shy in front of the camera, that seems to be a thing of the past. In 2013, taboos were blown away. Podcasters from all age groups invaded YouTube, to varying degrees of success, in Arabic, Moroccan dialect, French, English, and even Spanish.

Some, like Khalid Sheriff and Yassine Jarram, have been able to capitalize on their success to launch careers in media; others continue to post their videos as extremely popular amateurs, like Moul Kaskita (literally “the guy with the hat” in English), who has positioned himself as an opinion leader with more than 64,000 subscribers on YouTube and 9.8 million views.

Sina (her real name is Ibtissam) is a young girl who took a chance, posting three video clips in which she interpreted songs in English and Turkish, in her quest to become an improvising pop composer, singer, and dancer. Loved by some, condemned by others, her videos divided Morocco. Finally, she was picked up by national radio stations. Her video clip “Handsome like Angel” went viral, reaching more than two million views in only two weeks.

Yasine Massouath, well-known for his long experience in Buzzeff Advertising and his administration of one of the two “official” pages of the fictional and popular character Bouzebal, launched Morocco’s first web TV this year, simply known as lweb.tv, another milestone in Morocco’s internet development.

The emergence of a Moroccan digital market

In Casablanca’s downtown cafés, one can now meet young entrepreneurs with laptops, tablets, and smartphones who dream of replicating the success of global entrepreneurial stars. Becoming part of an internet success story is an attainable dream now for Moroccan entrepreneurs, thanks to a strong and emerging digital market.

Many apps, currently under development, regularly participate in international competitions and fundraising, for example MySportner, Ev.ma, Doofry, and Stagiaires.ma. The Inwi Days or BeMyApp hackathons celebrated Moroccan creativity and allowed the launch of mobile games inspired by cultural heritage as well as apps to address specific needs in Morocco. Blassini, for instance, is an app to verify the number of available spots in a parking lot. DiniM3ak is a carpooling solution, while Morocco Beach lists the best beaches and surf spots in Morocco.

The arrival of new companies to compete with Maroc Telecommerce promises to further boost the market by diversifying payment possibilities and rates. Even the international giant Rocket Internet noted the Moroccan market’s potential and launched three of its products there: Jumia, Kaymu, and helloFood. Finally, the Russian corporation Avito developed, in less than two years, a huge user base which has made Avito one of the ten most visited sites in Morocco.

Finally, it is now possible to pay almost all bills and taxes online. It seems that e-payment has convinced the Moroccan consumer.

This past year was also marked by the organization of several technological events, so many that space here allows for the mention of only the most significant.

Professionals with significant budgets met at MED-IT salon and at SMI (Social Media Impact or Businesses) to ensure visibility far from guaranteed on the international level. Those with lower budgets attended more modest events like Digital IT Days, DevCom Casablanca, and Social Media Days.

As for those who had ideas, they met during Startup Weekends, BeMyApp, and trainings provided by CEED Morocco. People who represented the different web communities (bloggers, podcasters, photographers, and others) met in less formal and friendlier events such as Maroc Web Awards, Creatima Awards, Inwi Days, and different TEDx iterations.

This year, distances have shrunk and people have come together more than ever, facilitating the emergence of a new wave of encouraging thinking on digital entrepreneurship.

Power in the hands of community

2013 has proven it: when the web community is united, nothing can stop it.

Following a judicial and diplomatic kerfuffle, Spanish child rapist Daniel Galvan was given a pardon by Morocco’s King last August, including permission to peacefully leave the country, sparking an unprecedented popular outcry on Facebook and Twitter. These touched traditional media, politicians, and civil society. As a result, his Majesty King Mohamed VI reacted by welcoming the victims’ families, initiating a formal investigation and (mostly) canceling his pardon.

The pre-publication of the new Digital Code has also upset internet users and professionals. These reactions forced the Minister of Industry, Trade, Investment and Digital Investment, Mr. Moulay Hafid Elalamy, to explain the matter and to promise more adapted and efficient legislation.

Internet users can also be proud of their role in pushing their Raja Casablanca football team to the final of the football club’s World Cup. In addition to the commitment of the players and the excellent technical direction, the team had the support of its fans that shared encouragement, joy, and pride on social media, covered for the occasion in green, the color of the Casablanca team.

Morocco’s 2013 Numeric Plan, with a staggering budget of 5.2 billion dirhams (over $631 million USD), aimed at making the country a technological hub as well as creating around 26,000 jobs. It also wanted to equip small businesses with IT tools, train employees, and update the most complex structures. Those objectives were only partially met for several reasons. However the objective of professionals and officials remains the same: to make the ICT sector a generator of wealth.