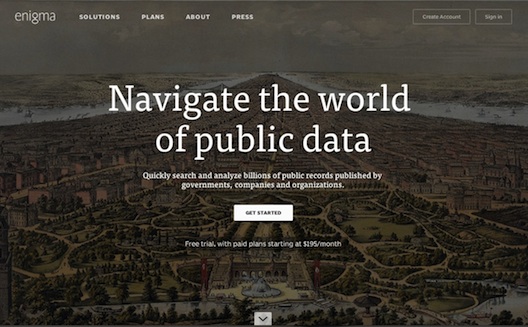 It seems like nothing can stop Moroccan entrepreneur Hicham Oudghiri and his big data startup Enigma. After getting tweeted by President Obama and winning TechCrunch Disrupt 2013, the startup announced this morning a Series A fundraising round of 4.5 million USD, led by Comcast Ventures, with participation from American Express Ventures, Crosslink Capital, and The New York Times Company.

This list of investors says a lot about the service. Not only does it bring together two major VCs from both Silicon Valley and NYC, it also got the attention of investors with American Express and the New York Times, showing how wide the application of the service might be in both the business and banking worlds, as well as the world of journalism, Oudghiri explains.

The entrepreneur started with a simple observation: there is an increasing amount of data in the world but it’s inaccessible, either because it’s not easy to find, scattered throughout the web or offline, or there is just simply too much to process. To quote Oudghiri from his TEDxCasablanca talk, “big data = too much data.”

Enigma gathers all this data and puts it in a search platform to understand the world we live in and help journalists, consultants, banks, activists, and scientists make informed decisions.

While I was Skyping with Hicham last October, he managed to find and compare within a few second a list of Boeing’s and Airbus’s biggest clients, the number of apartments the Kingdom of Morocco owns in NYC and their values, and the names of the suppliers of his wife’s company’s competitors.

The company offers different plans depending on clients’ needs (see below). In the future, the service should be accessible to everyone thanks to a premium model. 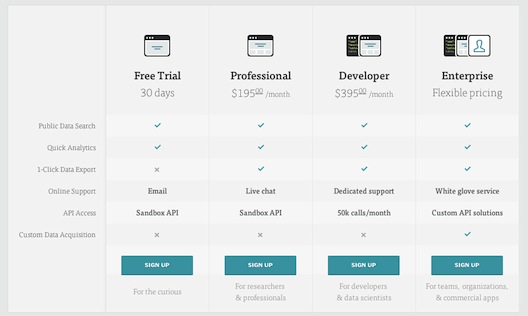 This fundraising round will enable Enigma to develop a Public Data Graph that will enable the public to both organize and interpret the data themselves, draw correlations between different sets of data, and pull up the most interesting facts.

This is good news because this kind of fundraising is a success story other Moroccan entrepreneurs can use to get inspired to start their own companies, and to aim for global reach. It’s also good news for the Moroccan ecosystem because the more the Moroccan tech diaspora grows, the more it can give back to its country, both in terms of mentorship, and investment in local startups.

This is something that Oudghiri cares about. As a successful entrepreneur and former hedge fund manager, he is putting together a venture capitalist fund for Moroccan startups called Lixus.

For this Moroccan, who grew up between France, the United States, and Morocco, there is, without a doubt, a lot of talent in Morocco. He also believes that no obstacle facing Morocco is insurmountable, not even the slow internet connection or the dirham’s inconvertibility which limits international purchases.

The real issue, he believes, is the lack of success stories, the lack of acknowledgement of entrepreneurs, tech talents, and hackers, and the fact that the country is too small to interest VCs. Investors, he says, need to invest in 200 startups to get one that works.

Moved by personal reasons, and the desire to spot these Moroccan talents before anyone else, Hicham plans to create the first Moroccan VC fund to play big. Will Moroccan startups be ready?

Learn more about how Enigma works, and how powerful it is in our in-depth November profile, and discover what Oudghiri has to say about the dark side of big data.