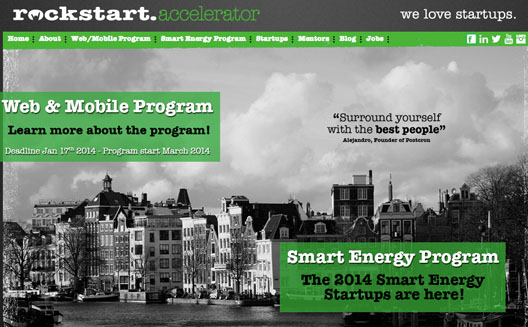 As startup accelerators boom on a global scale, the Middle East is seeing a fair amount of the action. In 2013, several new accelerators launched in the region, inclduing Fast Forward in Palestine, Bedaya and JuiceLabs in Egypt, and In5, Turn8, and Afkar.me in the UAE. Others, like France's Safir Labs, have shown interest in startups from the region as well.

The latest to jump on the bandwagon is Rockstart Accelerator in Amsterdam, a three-year-old accelerator that focuses on startups that work in mobile, web, and now, as of late last year, smart energy.

Following the trend in specialized accelerators (such as those focusing on mobile or healthcare), Rockstart helps startups from emerging markets break through to reach a global market.

Inspired by success stories such as Vimov, the Rockstart team is now seeking applications from startups in the Arab world, with a deadline before January 17th. “We believe we can be a great addition to the emerging market in the region since we can tackle initial funding challenges,” says Eleftheria Karyoti, Marketing and Communications Manager.

The accelerator takes entrepreneurs through a two-part process: an intensive 100 day program to develop and grow the startup, followed by an optional three month summer program that brings startups to Silicon Valley for a month. Following the principles of lean startup methodology, Rockstart Accelerator supports ten startups in each cycle, with last year’s startups coming from diverse backgrounds.

“The value of coming to Amsterdam for three months is bigger than staying in their countries and struggling for a longer time,” explains Karyoti. “We give them deep knowledge, skills and connections to take home and and succeed in the global sphere,” she says.

When it comes to investment, Rockstart gives more investment for less equity than most key accelerators in the region, offering $20,000 in seed funding for 8 percent equity. They also provide entrepreneurs with a network of over 100 mentors, a workspace in the centre of the city, and many in-kind services and products worth over $75,000.

Interested startups can apply to the third Web/Mobile Accelerator program before January 17th.