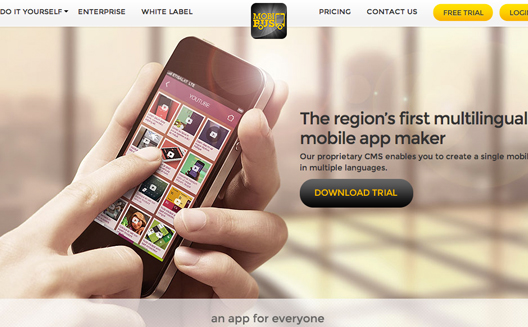 New entrepreneurs welcome all the help they can get, especially because most of them need to invest their every penny in development and expansion. Mobile apps are increasingly filling the needs of entrepreneurs in the region and around the world. Mobibus, a new project recently launched to develop apps, is helping the app makers help entrepreneurs – and everyone who uses apps.

Similar companies have been proliferating for few years now, like Infinite Monkeys that targets Arab users, or the famous US App makr, launched in 2011. However, Mobibus considers itself a unique product, since it is the first to present multilingual services. “With Mobibus,” says Mohammed Johmani, the services’ co-founder, “the application is designed in both Arabic and English, unlike traditional app makers that design a paid app for each language.”

The idea was born two years ago, Johmani says. First, he had to convince one of his partners, Hussam Abu Zaalan, to quit a stable job in a large Kuwaiti bank to establish this company. Shortly thereafter, the Lebanese partner, Pierre Azzam, joined. The three partners bootstrapped Mobibus with their own money, and hired a team of seven full-time employees. Eighteen months later, Mobibus was soft-launched during Gitex 2013 in an attempt to discover the market and pave the way to a bigger marketing campaign.

Mobibus allows developers to design apps themselves in three simple steps. After registering, the user directly starts designing the app. They then can choose the menu style (tab bar, dashboard, or tabled), and upload images (background image, splash screen, branding logo). Mobibus also allows the user to upload icons and pictures to customize their application to better fit the branding.

When the design is done, the user moves to managing the content. They choose the news, links, and information they want to publish, prioritizing the most important. Then, the user pays the fees, and publishes the app on both iOS and Android. It’s a simple process that requires only concentration and a bit of good taste.

Afterwards, the user can make some adjustments at any time, as the application allows access to the Content Management System (CMS). Johmani explains that a restaurant owner, for instance, can make updates to the menu directly, without having to resort to developers and programmers, thus saving both money and time.

Payment plans vary between $125 USD per month billed yearly or $150 USD per month billed quarterly. Until now, Mobibus has around 500 users who are working on their apps. However, the main problem remains that the concept of DIY is still relatively new in the region. According to Johmani, “many prefer to pay money and get a 100% ready-to-use application.” Therefore, Mobibus also offers a ‘we design it for you’ option.

Mobibus also provides services to big corporations which have so far been its biggest clients, helping these companies develop content-heavy apps that need technology and settings not available with the DIY option. But, Johmani says, 60% of the apps are made via the DIY service.

So far Mobibus has designed apps for six large companies, for example, the City Center mall conglomerate which owns twelve malls throughout the Arab world.

But the target of Mobibus is first and foremost SMEs and entrepreneurs. So this year, it aims to separate its services for big companies, in spite of the fact that Mobibus has become profitable largely thanks to these corporations. This year will tell whether it can shift its business towards the individual entrepreneur.

Disclosure: WamdaCard has a partnership with Mobibus, providing 40% off your yearly App Maker package.