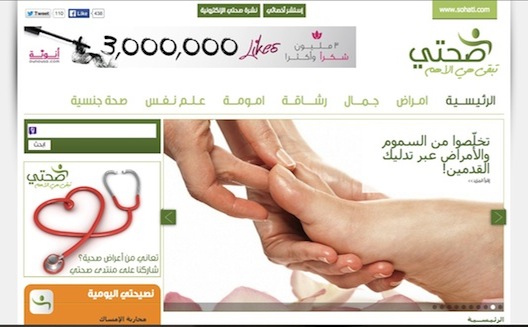 Many entrepreneurs in are now trying to find solutions to make healthcare more accessible throughout the Middle East, a region facing major issues spanning from a shortage of online information in Arabic, a lack of doctors in some towns or isolated areas, and taboos around several crucial medical specialties.

Websites like Altibbi and WebTeb want to provide medical content in Arabic to help Middle Eastern internet users understand what ails them. While Altibbi focuses on interactivity, letting users ask questions to doctors whose social profiles they can follow and use an interactive symptom checker, WebTeb bets on foreign content translation and a slew of functions including a doctors repertory, a Q&A section, and a symptom checker.

These websites might be attracting considerable traffic, but their language is too medical and scientific to be accessible to the average Joe, and they don’t deal with illnesses that may be considered taboo, says Zena Sfeir.

Last February, this young Lebanese along with three friends started Sohati, a medical content website that differentiates itself from the competition with a more independent editorial line, focusing on nutrition and taboo fields like sexology, dermatology, psychiatry, and gynecology, and options for a more user-friendly tone.

To remain accessible, the content is written by an editorial team, and checked by independent doctors and a co-founder with a medical degree Naji Gehchan, who are also in charge of answering user questions.

It’s a win-win situation, explains Sfeir, because doctors get more visibility – a major concern for doctors in a taboo fields – and users get access to doctors they couldn’t go to because of distance from home or social embarrassment.

By the end of next month, a year exactly from when they launch the website in beta, the team will launch a new interface and a new functionality: online consultations.

Users will be able to make an appointment with a doctor and to get a video consultation. Those for whom a video consultation would be uncomfortable can opt for a audio-only consultation or an online chat. For inspiration, the team looked to American websites which already offer these services. Prices for online consultations will be well below what these doctors would charge for in-person visits; the doctors agree to cut their prices in exchange for flexibility and visibility.

The website is accessible to all Arabophones, but the marketing efforts will target the Gulf countries in particular (Sohati works with a Dubai-based ad agency). The team, however, is based in Beirut, where most eligible doctors practice.

Back in November 2012, thinking they were attending a conference, Zena Sfeir, Naji Gehchan, Elsa Aoun, and Wassim Kari accidently ended up at a StartupWeekend at Beirut co-working space AltCity, where they pitch this idea to journalists and investors. Convinced by the warm welcome they got from Wamda Editor-in-Chief Nina Curley (read her piece here) and some business angels including MITEF’s Hala Fadel who ended up investing in the project, Sfeir and Aoun decide to quit their jobs and launch Sohati. Their husbands Gehchan and Kari continued their regular jobs but began working on Sohati on the side.

It’s not unusual to hear about management troubles within startups with three or more co-founders, or those founded by friends, but that hasn’t affected Sfeir: “It’s an advantage for us. Because we’re friends, we know how we work, and think.”

Also, each cofounder has a very clear role, and complementary profile, she adds. Zena has a business background, Naji has a degree in medicine and is a sales marketing manager in the pharmaceutical industry, and Aoun and Kari are both consultants with entrepreneurial experience (previously they launched Ounousa, a Arabic platform for women).

Currently, the website gets 300 to 400,000 unique visitors, but the team plans on reaching the million by September. By Q2 of this year, the company is also planning on release a mobile app to help users keep track of the drugs they’re taking. This is a major step towards offering an “exhaustive health solution,” says the young entrepreneur.