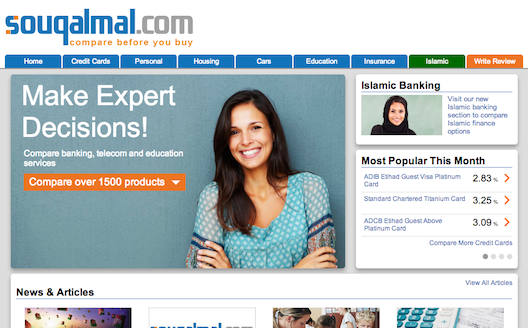 Souqalmal.com, the Dubai-based financial comparison site led by Ambareen Musa, is set for a quantum leap, after securing $1.2 million from Hummingbird Ventures, the Antwerp-based venture capital that has previously invested in MarkaVIP, CicekSepeti, and Peak Games.

Today, Souqalmal.com simplifies search for users in the UAE, Saudi Arabia, and Kuwait, allowing them to compare and review a range of financial products, including credit cards, loans, cars, schools, insurance, and broadband, on a simple interface. Interested consumers can request a callback from a bank or vendor at a time of their choice, rather than wait on hold.

For interested shoppers, it’s a potential timesaver; for banks and providers, it’s a marketing channel that facilitates connection to customers already seeking financial products. “By the time they contact the bank, the bank is chatting with a person who is actively interested in their product, so they are already 50 percent there,” Musa explains.

Unlike the slew of fashion e-commerce sites that have launched this past year, perhaps inspired by the growth of flash sales site MarkaVIP, Souqalmal.com is decidedly no-frills.

Yet this focus is part of what sets the startup, and Musa, apart. With a family history of entrepreneurship and a knack for localizing a global concept, all while raising a young daughter, Musa, originally from Mauritius, could be a posterchild for the next generation of up-and-coming women entrepreneurs in the region. The woman exudes efficiency.

That drive is reflected in her approach to building a brand that consumers can trust, rather than chasing traffic, since the site's launch in May 2012. “Last year, we didn't spend a lot on marketing, because we wanted to grow organically, and we wanted to grow in a way where consumers see us as a credible source,” she says.

Souqalmal.com’s metrics support that story: at press time, its pageviews wouldn’t rival a media site, but its low bounce rate (34 percent), a healthy 4.3 pageviews per visitor, and an average of over four minutes on site per viewer reveal that its readers are engaged when browsing the site. Because its traffic is targeted, conversion rates are high when it comes to browsers requesting callbacks, Musa says.

Now that the site has traction, 2014 will be the year to make it a regional player, Musa says, by expanding the team, improving the interface and technology, and building in two key directions: content and mobile.

Over the past year, Musa discovered that Souqalmal.com’s content, which is now published on the site’s blog, was a central element of its marketing. “We work on a cost-per-lead (CPL) performance model, which media agencies love. You pay for consumers that are willing to talk to you,” she explains. “We were doing it without realizing it, but people really enjoy our guidance and what we’re writing for them.”

Unlike Cashy, a site that offers personal financial advice along with the ability to consult experts, Souqalmal.com’s advice is focused on credit, loans, and testimonials. Its content is now on Yahoo! Maktoob thanks to a partnership deal inked this past May, and Souqalmal.com also supplies the Money pages of Emirati news site The National with financial data for its weekly rates report.

For site growth this year, mobile will also be critical; almost 50 percent of Souqalmal.com’s current readers view the site on mobile. “People want to review things right there and then,” says Musa. By launching a mobile optimized site, she says, “we'll allow our users to have the banking industry in their pockets.”

After debuting new verticals such as Islamic finance, education, and insurance last year, Souqalmal.com is also set to create a section for banking products for small and medium-sized enterprises (SMEs) in 2014.

The process of educating banks about the importance of sharing the details of their products on Souqalmal.com hasn’t been easy, Musa admits, but Hummingbird - which has portfolio companies in Greece, Belgium, Morocco, Turkey, and the Netherlands - will be a large help as the startup scales.

“[The Hummingbird Ventures team] are very hands-on; the questions they were asking and how they assessed the business were very impressive. They get down to the ground, and feel like part of the team rather than the guys who you report to every quarter,” she says. “We'll be making bold investments to ensure that this business is scalable.”