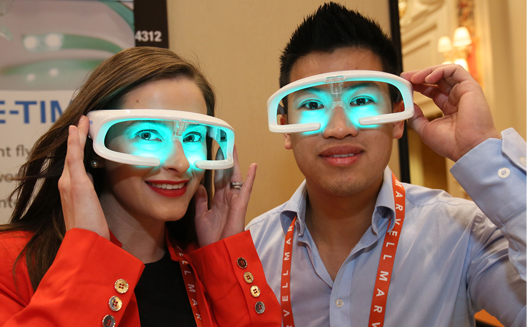 It seems like smartwatches won't be the hottest trend in wearables for long.

Along with Google Glass, we’ve witnessed over the past couple years a wide range of wearables made to blow the minds of sports and fitness addicts. Microsoft’s bra that notifies when the person eats too much, Armour39 a smart t-shirt that tracks heartbeats, Instabeat a device to wear on swimming glasses that seamlessly tracks a swimmer’s heart rate, caloric burn, and number of laps, to name just a few.

Today, the market is worth around $10 billion, set to triple to US $30 billion by 2018. At the Consumer Electronics Show (CES) in Las Vegas this week, exhibitors are proving that 2014 will be a year to when it comes to breakthroughs in wearable technology.

Owned and produced since 1967 by the Consumer Electronics Association (CEA), the yearly conference is bringing together over 152,000 attendees from more than 150 countries to reveal the newest trends, including digital healthcare, and wearable technology was revealed in a fashion showcase.

Intel's chief executive Brian Krzanich set the tone for the conference with a keynote speech showing off the company's new wearable devices, including smart earbuds with biometric fitness capabilities, a new headset that integrates with existing personal assistant technologies, VentureBeat reports. Krzanich called upon the world to innovate with the Intel “make it wearable” challenge, which will offer a total of $1.3 million in prizes.

Here's a look at some of the most exciting products revealed at the event.

Intel Edison, a Quark-based computer housed in an SD card, that can be incorporated into baby clothing to send notifications to your coffee cup to let you know if your baby is getting too hot.

The Core, Sony's screenless activity tracker, which connects to a LifeLogger app to record your movements, your photos, the music you listen to, and your social network interactions, collating them in an automated journal.

A "smart bowl," also by Intel, that will charge electronic devices left in it- without cords, plugs, or sockets, Business Insider reports.

Tao Wellshell, a pocket-sized exercise device that you squeeze to build up arm strength. Uses sensors to detect how hard you are squeezing, and will adjust the resistance offered accordingly, noted on the Financial Times' live blog.

Kolibree, a smart toothbrush that tracks how well the user brushes his teeth and gives scores on a smartphone dashboard, revealing which part of the mouth were missed and suggesting techniques for improving effective brushing, the IBT reports.

LUMOback, a small wearable device that vibrates when it detects bad posture. It is also an activity monitor that counts steps and calories burned, and can detect when you're walking, running, sitting or lying down. And it knows when you're slouching, and delivers some gentle vibrations to remind you to stand up straight.

Mother, a reprogrammable base station that tracks “cookies” for movement and use. The cookies can be away from Mother for up to 10 days and still remember what they did during that time, Wired reports.

The show continues until the 10th, and wil be including a promising keynote speech on "MOOCs and the next generation campus," in addition to more interesting conference sessions on how robots are changing the way we live, how to attract venture capital, and breakthrough business models in digital health.