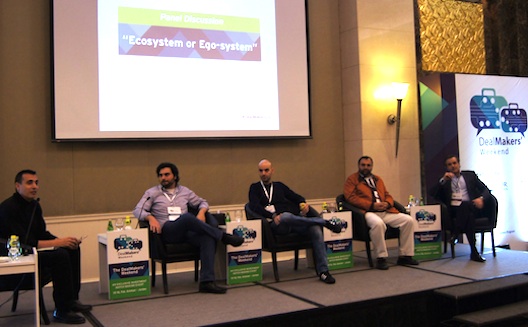 Dealmaking was the name of the game on Saturday and Sunday at the Four Seasons Hotel in Amman as an impressive list of investors and late-stage ICT startups came together to establish connections and sniff out potential investment opportunities at DealMakers' Weekend.

Organized by Endeavor Jordan and int@j, and touted as “an exclusive investment match-making platform,” the event served as a forum for growth stage ICT startups to network with a host of notable foreign and domestic investors searching for the next big startup.

Two hour-long rounds of one-on-one speed networking between startups and investors were the backbone of the event.

“[Events such as DealMakers] are such amazing learning experiences, even if you don’t find an investor. Just the opportunity to talk to so many people at the same time and get their feedback and input is such a great learning experience that we wanted to bring the event to Jordan,” Rasha Manna, the Managing Director of Endeavor Jordan, told Wamda.

While investor-startup networking was the primary goal behind the event, investor-investor networking was an ancillary, but as-important activity, as many international investors were seeking domestic co-investors that would be able to keep a close eye on a mutual investment, Manna explained.

The weekend also featured a series of panel discussions (featuring Wamda CEO Habib Haddad) and “fireside chats,” which tackled many of the industry’s most relevant issues and debates, and provided valuable insights from leaders of the entrepreneurship community. Discussion topics included “The Importance of Capital,” “Innovation and Investment,” and “Lessons Learnt in DealMaking.”

For investors and entrepreneurs alike, the weekend served as a benchmark.

“Events like this prove the great progress that the region has made, specifically that Jordan has made over the past years,” said Ettore Leale, a managing partner with Xplorer Capital, a San Francisco-based growth capital firm that specializes in internet and mobile businesses from emerging markets. “Today we’ve been listening to all of these sessions about entrepreneurs justifiably saying that it [the ecosystem] should be better, but the reality is that the improvement is huge. Of course there is a lot more to do, but I think it’s important that the community here appreciates and recognizes the great successes that have been made.”

Attendees were quick to dole out acclaim for the event and the ecosystem, but there was also some criticism directed toward the approaches of some entrepreneurs.

“You’re supposed to be here to walk away with an investor. That should be the goal, and not really to come here and socialize and have a coffee,” said Oasis500 CEO Yousef Hamiddadin, about a sense of entitlement and lack of preparation that he recalled sensing with some entrepreneurs.

He also critiqued the disconnect between the demands and realities of the market and the direction being taken by some of the startups in attendance. “What I would like to see more and more is that stickiness to what the market really needs,” he said.

As an outside observer, the event was a success in that dozens of maturing startups from the region were able to sit face to face and exchange business cards with high-profile international investors. While there were entrepreneurs representing six different countries, it was particularly nice to see many Palestinian startups, which have been in Amman in recent weeks, in attendance.

“I think that it [the event] was a good starting point for e-Jameya,” said Isam Abuteir, CEO of the West Bank-based lending platform. “The investors were interested about the concept and were surprised about the idea itself. At the same time, they asked many of the questions we are asking ourselves and trying to answer. We both are trying to answer the same questions, and hopefully something good will come out of it.”