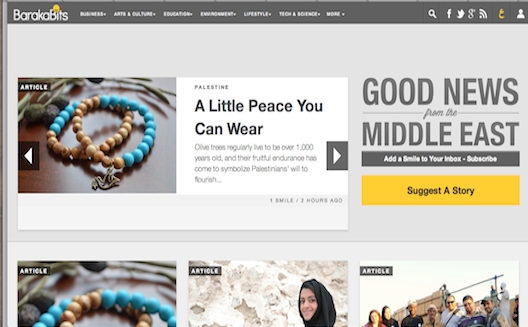 “It’s OK if we don’t see thousands of views on our articles,” says Rama Chakaki, founder and CEO of news site Baraka Bits. “We’re willing to sacrifice views for the long term investment.”

Maybe this is a nontraditional attitude for the CEO of a news website, but Baraka Bits is not a traditional news website – especially for one that’s focused on the Arab world. With the tagline “Good News from the Middle East,” Baraka Bits seeks to document and popularize a “simple and uplifting narrative on the Arab region and its people, culture, environment, and religions,” a far cry from the kind of regional stories that are reported on mainstream media outlets.

The Arabic word baraka means abundance, blessing, prosperity, good tidings; the word carries similar meanings in Malay, Swahili, and Hebrew. Launched in beta in July 2012, Baraka Bits operates under the same ethical ethos as Baraka Ventures, the fund co-founded by Chakaki and Mahmoud Abu-Wardeh: be agents of positive change, counting not just the profits a company makes, but its overall contribution to the community.

But while success for Baraka Bits might not be measured in ad sales or arguments in comments sections, as it is for other newsy websites, in order to achieve the success its founders want, they still need to attract a large user base of “invested readers… who are genuine, engaged, asking follow-up questions and clicking through to the causes we write about,” Chakaki says. And perhaps unlike many in the recent spate of media startups, she’s thinking long-term.

It was this approach, based on years of focus groups in the US and the Emirates, that led Chakaki and her team of 3 other full time employees to revamp the site’s design, which went live in early November. “We studied the direction the industry is going in,” she said, wherein “people write or suggest their own stories on news or microblogging platforms, like Pinterest, StumbleUpon,” or BuzzFeed Community.

Visual appeal and ease of sharing were also key factors in the redesign, she says. “We want to keep the stories short, with a big focus on images because [based on evidence collected in our focus groups] that’s how people make a judgment call on whether they want to read an article.” More sharing options are also available with the new design, rather than the usual Facebook and Twitter: “we now have a widget that allows us to share across 12 different networks,” Chakaki says.

The response to the new layout has been resounding. “We’ve had not only great feedback, but a huge spike in visitors since then.” The biggest shift, she reports, is that “we have started getting a lot of audiences in countries outside the UAE. We went from getting traffic from 90 countries to 136, all over the world. Our US traffic has grown by 400% since we launched the new design.”

But these new visitors aren’t just reading stories; they’re engaging with the content in a new way. They’re clicking the new “Suggest A Story” button (prominently displayed on the homepage), they’re contacting Chakaki’s team asking to advertise and sponsor the site, and they’re sending requests to the editors. Photo essays get “especially high engagement,” Chakaki says, “300 people clicked ‘like’ on the latest photo bits post.”

But again, ‘likes’ are just means to an end – making content available and relevant to people and investors who are seeking to change the region for the better – on which Chakaki and her team will double down in 2014. “We’re on the ground… and that’s where we want to stay” this year, she insists.

She’s especially invested in exploring the possibility of Baraka Bits being used for educational purposes. An initiative she takes special pride in is one that trains Palestinian refugees in Lebanon, the West Bank, and Gaza, for whom work opportunities are severely limited, to write journalistic stories with the goal of their becoming regular Baraka Bits contributors, and perhaps beyond. “I hope to expand this beyond just getting our own journalists trained,” she says, “to getting people in schools trained on how to engage in positive narratives.”