Due to high unemployment rates in the Arab region, more people than ever are launching their own businesses, hoping to create their own job opportunities, according to a recent survey conducted by Bayt.com.

A surprising number of those surveyed, 73%, said that they preferred entrepreneurship over employment, while 82% strongly agreed that unemployment is a pressing issue in their country. 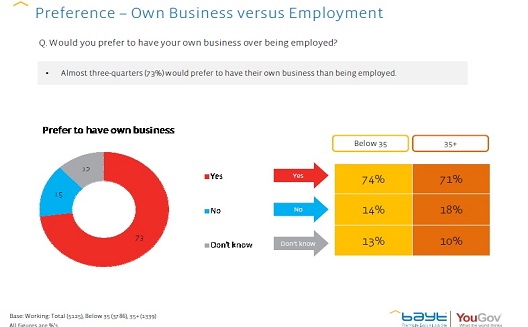 The survey, which divided respondents into two age categories, those aged under 35 (millennials) and those who are 35+ (non-millennials), revealed a few unexpected results in a region where entrepreneurship is not yet a well-trod career path.

Seven out of ten respondents believe that they need to pursue higher education in order to advance in their careers. In the Gulf and North Africa, the majority of people tend to consider higher education crucial for career growth. In Saudi Arabia and Qatar for instance, 76% of respondents (both millennials and non-millennials) think higher education is crucial and in Egypt it's 73.5%. The rate drops to 55.5% in Oman.

Despite the stereotypes that most young employees entering the job market prefer government jobs, this study demonstrates that attitudes are shifting, and that most young people are willing to dedicate themselves to advancing their careers.