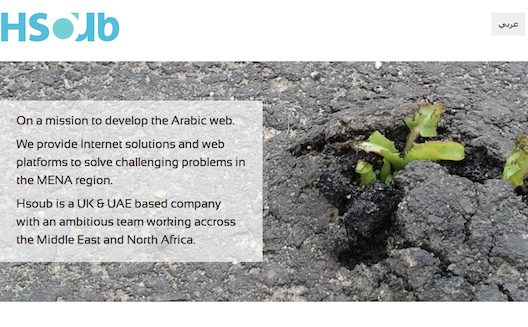 Hsoub, the web solutions company based in Egypt and the UK, whose mission is to develop online opportunities for people living throughout the Arab world, has announced that it now handles one billion ads per month. The organization’s advertising arm is not an agency, but a platform that serves to connect advertisers and clients in the hopes of helping foster mutually beneficial relationships.

We took this milestone as an opportunity to get Hsoub PR rep Mouad Khateb’s thoughts on the directions digital advertising may take this year, both for his organization and in the region more generally. While the ubiquitous banner ads have been and will remain to be extremely popular due to the fact that they’re “not restricted in terms of format and don’t require plugins,” Khateb reasons, he expects rich media ads to generally “become more popular in the coming year.”

Rich media ads, he says, are exciting because they are interactive. They're different to banner ads, which require potential customers to click through and fill out a form on a new page, in that the rich media ad flips over inside the larger page, allowing a user to register directly without opening a new window; “the conversion happens right through the ad itself,” Khateb says.

Part of this projected popularity is due to the fact that “the newsletter remains a very effective and popular marketing tool,” he continues, and that rich media ads produce “much better conversion rates” for users who are turned off signing up for newsletters due to a “long and exhaustive process.” E-mail lists, he emphasizes, “are very important [for marketers] because they can be used long-term.”

While the Middle East and Africa leads the world in ad spending growth - according to a recent eMarketer study, investments in digital ads grew by 47.9% in 2012 - the region still has the "least developed advertising economy in the world," totaling only $17.2 billion USD in 2012.

At Hsoub, Khateb says, digital ad spending tripled in 2013. This figure may signal an acceleration in growth for regional ad spending in 2014.

Beyond expanding the successful advertising prong of the company, Hsoub plans to focus on promoting its online communities in the coming year. The first, called Khamsat (‘fives’ in English, because services cost between $5 and $25 USD), is “a marketplace for Arab freelancers to buy and sell services online, on a secure platform managed by Hsoub.” These can be creative services – writing, editing, web design – or application development, website management, and more. This platform is already quite successful: two weeks ago, its team celebrated their 100,000th user.

The second online community Hsoub will be promoting this year is called Arabia I/O, which Khateb describes as “a social community of Arab IT experts who can share knowledge, discuss trends,” and come together to collectively help contribute to the Arab web.