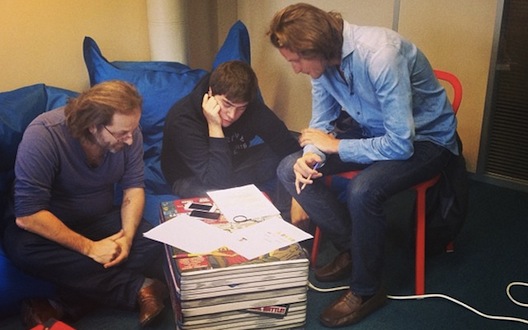 Lately, we’ve reported on a growing number of European and American initiatives aimed at startups in the Arab world. Needless to say, we’re thrilled.

This time, it’s Parisian accelerator Startup42 which is opening its third season to startups from the MENA region.

If one European accelerator was going to do it, it had to have been Startup42; its founder is a textbook example of the Lebanese diaspora. Of Lebanese origins, Daniel Jarjoura was raised in Guadeloupe, and educated in France, where he got a diploma from ,Epita France’s best coding school. He went on to work in Eastern Europe and in the United States before deciding to settle back in Paris to fulfill his entrepreneurial desires (he’ll be announcing the launch of two startups soon).

In France and in many other countries, tech professionals (developers, searchers, and even engineers) rarely turn to entrepreneurship, mostly because they don’t know about entrepreneurship and its possibilities, or don’t have the business tools to succeed. Clearly this is wrong, think Jarjoura: if the U.S. has taught us one thing, it’s that who could create a better tech startup than tech pros?

With the help of Epita, Jarjoura developed an accelerator tailored to tech professionals, speaking their language while training them in the business know-how and mentality necessary to success.

This accelerator, composed of 80% of tech guys, got rid of all the classes and empty talks one finds in traditional accelerators, instead focusing on huddles with the other startups in the program, and relaxed, intimate chats with international high profiles. In groups of no more than ten people, mentors sit down to give their expert tips in fields like press relations, crowdfunding, and more; VCs come to explain how they work and what they expect from the participating startups; and successful tech professionals-turned-entrepreneurs share their stories and mentor startups.

During its second season, Startup42, the first French accelerator to join the Techstars Global Accelerator Network, attracted mentors like David Cohen, founder of Techstars, Dali Kilani, former CTO of Zynga and now of iFeelGoods, and Jean-Luc Gallejo, co-founder of KickStarter hit iSketchnote. You can catch up on December and January's highlights on Storify.

Their approach seems to be working. One of their seven alumni, MotionLead, is already in Silicon Valley, while another one, Modizy, raised €210,000 from international investors.

The accelerator is now opening its doors to French- and English-speaking startups for a third season that will begin in mid-March. For purposes of full disclosure, I have to add that I’ve helped Jarjoura with Startup42 for a couple of months; this has only convinced me of the quality of the team and the model. I was impressed by the quality of the chats, during which the speakers shared stories and tips they wouldn’t have shared elsewhere, and by the hacker mindset of many participants.

Last thing to add: Startup42 is a not-for-profit. Funded through partnerships, Startup42 doesn’t invest, and doesn’t ask for capital.

You have until March 3rd to apply here.