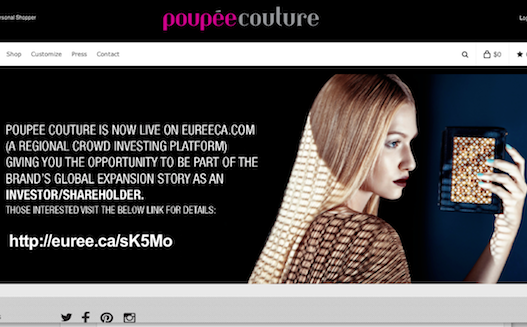 Poupée Couture is the latest in a recent bevy of startups to be successfully funded on Eureeca. The luxury brand, having raised over $80,000 USD (almost $20,000 over its initial goal) just 10 days after launch, has become the fifth startup in just a few months to reach its funding goal on the regional crowdinvestment platform.

Founder Roula Ghalayini, describing the experience of fundraising on Eureeca as “almost surreal,” revealed her approach to crowdinvestment on a call with Wamda. “I wanted to try as much as possible to keep [the investment] among friends, family, and loyal fans,” she says, among whom she spread the word of the Eureeca campaign long before she actually launched. Of her 10 investors, “6 or 7 are friends or fans.” Now that her campaign is in the overfunding phase, she is opening it up more to investment from strangers.

Her campaign benefitted, no doubt, from the fact that the company has been operational for five years and has already experienced some level of success; her handbags have been featured by such influential international fashion trend watchers as Vogue magazine, Paris Fashion Week, and numerous street style blogs. This kind of notoriety, building for five years, surely inspired confidence in her friends and family that have been tracking her progress.

As to her plans for the investment, they are twofold. First, she’ll put some of the money towards building out and popularizing her e-commerce site, a model in which she sees “so much potential.” In particular, she plans to focus on search engine optimization (SEO) and making sure there is always “fresh content” on the site. “Regionally and internationally, I will be trying to make it an interesting site to frequent,” she says.

She also plans to focus on re-branding globally. International buyers, she says, are interested but have criticized Poupée Couture as a brand for lacking an identity and a clear image. Justifying this, she explains “for the past five years, money has gone towards product development. Now, I want to shoot a campaign to give the brand a chance on a global level.”

The company's Eureeca campaign is open until April.