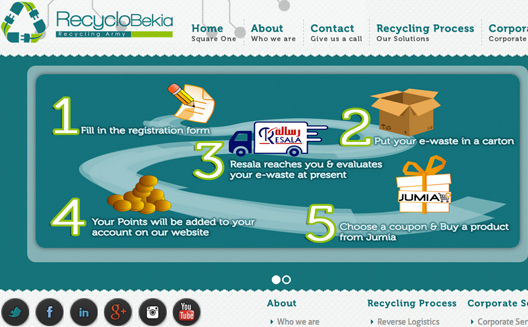 Since its initial launch two years ago, Recyclobekia has succeeded in building a e-waste collection network serving more than 25 big companies in Egypt. Today, the young startup is now offering curbside collection to individuals.

After raising awareness in universities and local communities of the importance of recycling electronic devices, the team has launched a system for collecting individuals’ e-waste. This service allows users to request e-waste pickup from their location, through the website.

In an attempt to bootstrap and offer incentives, the team set up a partnership was with Jumia Egypt, Rocket Internet's version of Amazon in Egypt and Africa, where users can redeem coupons with the points they gather by donating their electronic waste on Recyclobekia.

This goes in the reverse direction of e-commerce platforms. "Instead of filling your cart and paying for the value of the electric or electronic goods you buy, you still fill the cart but you pay with the value of devices you own as e-waste," says Mohamed Sehsah, CTO and Business Developer at RecycloBekia.

In a very easy process: individuals go on the site, sign up, and choose from the list of devices accepted as e-waste by Recyclobekia. After submitting the list along with their exact address, a representative contacts the user to set up a check-up and pick-up date.

“A car battery for example is worth 280 points, and a laptop around 180 points; when a user reaches 800 points they get a voucher worth 100 EGP [around $14.50 USD],” says Sehsah. While this might seem like a small amount, it’s more than people get by throwing their old electronics in the trash.

In the context of giving back to the community, the startup established a partnership with Resala, an Egyptian charity organization based in Cairo, to organize the assessment and pick-up of the goods. Resala representatives are trained by Recyclobekia ahead of time to evaluate the devices and report back with the points they are worth, for team members to add them to users’ accounts. "We decided to work with Resala as we want to support charity and help users by paying them for their efforts," says Sehsah.

With intel as one of its biggest suppliers, among others notable corporations like Mobinil, Sarmadi, General Motors, ExxonMobil, and Oracle, Recyclobekia is looking towards expanding its services outside Cairo gradually in the coming months, in addition to launching a cash back system as well, in the near future.

Check out the video below [Arabic only] explaining the individual e-waste collection process.