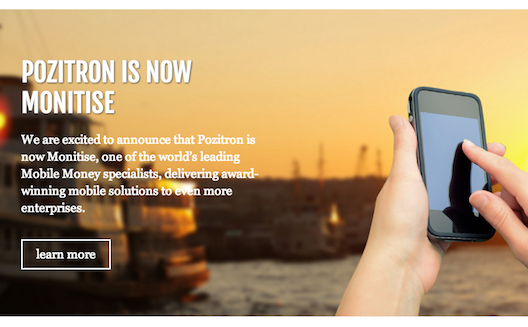 Despite Turkey’s economic struggles, good news is rolling in from its tech ecosystem. Pozitron, the mobile commerce technology company founded in 2000 by Fatih Isbecer, was acquired yesterday for $100 million USD, by Monitise, a leading UK-based mobile payment solutions company.

The all-share deal will see the entire Pozitron team of 135 stay on board and continue to produce mobile commerce solutions, while now working to grow quickly, says CTO Firat Isbecer.

Although the company has “refused a few termsheets” from other interested parties over the years, Monitise is “a perfect match,” says Isbecer. “Monitise have been one of the fastest growing companies in Europe when it comes to mobile money, and we wanted to be a part of a company where we’re chasing leadership in this space,” Isbecer told Wamda over Skype yesterday.

At the time of acquisition, Pozitron was fully owned by the founding team, never having taken on investment. It was a “profitable, debt-free company with four million dollars in cash,” says Isbecer, with its position in the Turkish market bolstered by its focus on international clients.

Although the Turkish lira has fallen around 4% against the dollar and the euro since the beginning of 2013, and has dropped almost 25% in 12 months, export companies doing business in US dollars are bolstered by the shift. “We don’t want our currency to be weak,” Isbecer insists, but since it primarily does business in US dollars, the downturn hasn’t challenged Pozitron.

In an all-share deal, Monitise will pay Pozitron £24 million initially, based on Monitise’s closing share price of of 66.5p on January 31st. Over the next three years, it will give an earn-out of up to £36 million based on achieving “aggressive” performance targets, TechCrunch reports.

After launching in 2000 as a software development company, Pozitron began focusing on mobile in 2006, Isbecer told Wamda over a year ago over Skype. Once its team of seven won a contract with Turkey’s largest private bank, despite going up against much larger competitors, they built the country's first mobile banking platform. It then went on to develop mobile payment and ticketing systems and m-commerce solutions, joining Endeavor Turkey in 2007.

Pozitron’s biggest challenges to date have been maintaining its culture while sustaining a breakneck 100% growth rate every year, Isbecer says. Under new management, he doesn’t foresee a large shift in the team’s product development, but asserts that user experience, usability, and ease of use will become the critical factors that set good mobile products apart.

Ultimately, it’s a moment of triumph for the Turkish team. “Having a successful process with your original company, and being able to sell that company to a successful global group is giving us a huge feeling of success, but we’re also excited about the future,” Isbecer says. “We’re closing a successful chapter in our professional lives, and we’re opening a new chapter in that same book.”

For Monitise, the acquisition strengthens its position in Turkey and the Middle East, where m-commerce is set to grow to $3 billion USD and comprise 20% of all e-commerce transactions by 2015, according to PayPal. In the US, where Monitise acquired Clairmail in 2012, over $150 billion USD in transactions were conducted over mobile, according to the Electronic Transactions Association. Three billion may be a relative drop in this bucket, but it gains Monitise better access to the market.

“This acquisition of Pozitron further reinforces our leading position as a global technology enabler at the heart of the Mobile Money ecosystem,” Monitise Group Chief Executive Alastair Lukies said in a statement. “It comes at a time when we are seeing increasing demand for interoperable Mobile Money services as payments become more digital by the day, not only in Turkey, Europe, and the Middle East but also around the world.”