To mark the opening of a local branch of Girls in Tech, Egyptian incubator The Planet hosted Rails Girls Cairo, the second event in two years looking to expand Egyptian women’s potential in the technology fields. The tech workshop, originally launched in 2010 in Finland, seeks to give girls the experience and motivation to design and build websites and software. The workshop sought to impart the basics of programming, and test participants with an individual practical experience in building web applications.

Of the 12 girls who attended the two-day Cairo session, many were new to programming and web design. But beyond this basic similarity, the diversity of the group was interesting to note, from age to occupation. One participant was at the workshop for a refresher; she currently works as an iOS app developer for a startup. 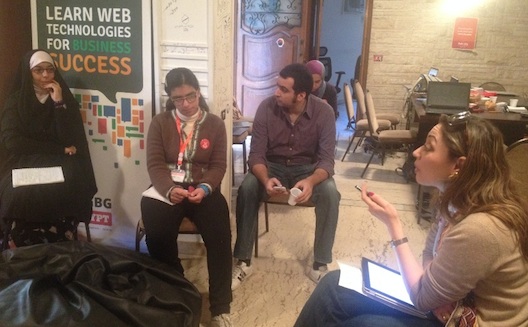 Kriman Saleh, 21 years old, was sick of reading short stories and books in her classes, so she decided to break her routine by trying a completely different field. Her frequent internet use led her to her new specialty, she says. Saleh went on: “The last time I studied computer science, I was in school. That’s why I felt that this workshop was tiring at first because [it was hard to get used to] the new technology. But I [kept at it, because I] wanted to add a new tool to my potential so I could fully master.”

As for Safia Achraf, a graphic design student at the German University of Cairo, she wanted to learn about programming, specifically how programmers launch their own projects. She had read several books on programming and used the workshop as an opportunity to broaden her knowledge. “In this digital era, not just teenagers use tablets and communicate via the internet,” she said.

On the first day, the workshop focused on teaching participants to build web apps using programming tool Ruby on Rails; coaches also explained HTML and CSS. The second day was all about practice. The workshop ended with a discussion of paths by which participants could sharpen their new programing skills, like Code Academy, Github, and Lynda.

Six coaches participated in the event. The sole woman among them, Maha Achour, is the co-founder and head of designer for Joy Patterns for social games. The other coaches were Ahmed Hazem, a developer with more than six years’ experience with Ruby on Rails, Tarek Chebli, a partner in The Planet with more than ten years of experience in web designing and developing, Marwan Arfa, a developer with a vast experience in open source, Youssef Chahine, a software engineer with Microsoft, Tarek Amr, a developer with ten years’ experience, and Emad El Said, a Ruby on Rails programmer who came from Port Said to participate in the Cairo event.

Ahmed Hazem, one of the organizers, noted the significant gap between women and men in the tech field. He believes this is due to the fact that school subjects like science and mathematics are less popular among girls, for whatever reason. Noha thought that talking about open sources among young people is not about learning programing but making a change in a society relying on information and data available for everybody and gathering them to get good results.

Noha Mahmoud, the event’s other organizer who also works as program manager at Cairo accelerator Juicelabs, hopes that this event will pave the way to build a women’s tech community; a community for women and made up of women, to teach more about tech tools, as well as other fields in which women are underrepresented.

In her speech, Minoush Abdel-Meguid, managing director and co-founder of Union Capital Partners, addressed the difficulties that women face to create a balance between work responsibilities and family duties. She pointed out that successful female role models should include not just business executives, but mothers and perhaps even vegetable sellers!