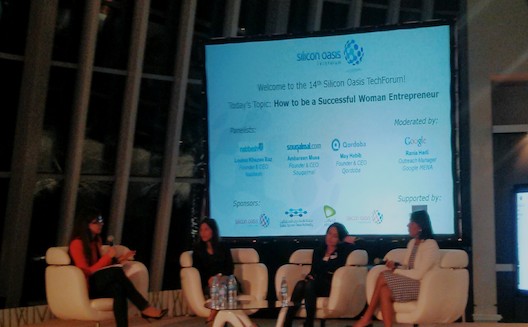 A panel called ‘How to be a successful woman entrepreneur’ was a highlight of the most recent TechForum event, organized by Dubai Silicon Oasis Authority in partnership with Etisalat.

The speakers agreed that the UAE is the best place in the region for women to launch their startups. For Habib, “the Emirates are better than many European or American cities. For me, it is easier to work here than in Silicon Valley because of the quality of life in Dubai, the city of services (from laundry to cooking and housekeeping services available at reasonable prices). However, it is not the case in other Arab countries like Lebanon or Egypt where business infrastructure [is less widely] available, making it harder for women to establish their companies.”

Panelists didn’t find any substantial regional challenges specific to women entrepreneurs. Habib asserted that she rarely think of her gender as a factor in her daily career. For her, the most important things have been “skills and talents.” The difficulties faced by a woman or a man “are the same.”

Khazen-Baz was the only one who acknowledged the existence of specific challenges she faced being a woman. “Sometimes, women must make more effort to get attention especially from investors. I don’t think it is due to lack of confidence but maybe due to the way women deal and communicate differently than men.” Habib and Musa disagreed strongly with this comment!

Musa pointed out that the most important thing for a so-called mompreneur is to make the right decisions and find a balance between her personal and professional life. This is difficult to achieve, “especially when you launch your own company.” She added: “you have to work additional hours, more than working in some corporate sectors. When I launched my platform, it was really difficult, especially because I worked weekends. But I started finding the balance and devoting more time to my daughter, hoping that she will be proud of me when she gets older.”

The three entrepreneurs agreed on the keys to success, for women and men alike. The following can summarize it:

To achieve success, it is very important to get the support of both public and private sectors. Khazen-Baz considered the role of the media to be very important, especially with the lack of initiatives specifically directed towards women entrepreneurs. According to her, if media dedicated more time for women entrepreneurs’ success stories, more women would be encouraged to pursue their goals. She stressed the role of media in changing stereotypes regarding how women are perceived at work.

While ostensibly about women entrepreneurs, the shift in the conversation towards a general ‘secret recipe’ for a successful entrepreneur regardless of gender may signify an increasing equality between women and men in the business world. It’s clear based on this discussion that the challenges, for many, are the same.