Women are playing an increasing role in helping to solve the growing social problems in the Arab world due to successive political and economic crises. Naturally, these women face several challenges in terms of maximizing their outreach to the media, as well as to their target communities.

In celebration of the International Women’s Day at the beginning of March, Ashoka Arab World organized a Social Female Entrepreneurs in the Arab Media event in Cairo to discuss ways for female entrepreneurs to reach out to the media, especially in the current political landscape.

An international foundation aimed at supporting entrepreneurs making social change, Ashoka sets itself the task of creating an integrated community for social entrepreneurs to shed light on the challenges they face, and introduce the media, investors, and governments to their projects and objectives. 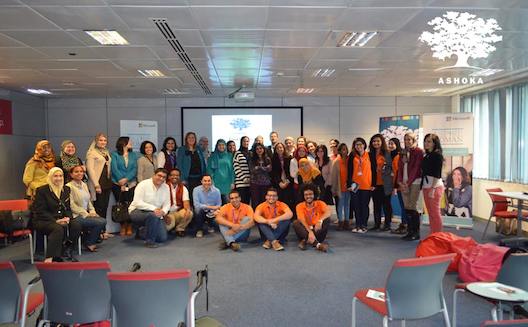 The first part of the event included three parallel working sessions; the first of these addressed the problems female social entrepreneurs face with various Arab media outlets (visual, printed, and digital). Media presenter Hanan Solayman, a Wamda contributor who facilitated the session, stressed the importance of “[communicating] with journalists and reporters on social media” to introduce them to a new project. Further, she said, new initiatives should include “blogs that contain enough information in Arabic about social entrepreneurship” and how it addresses societal problems.

The session also addressed the role of media. Based on the discussions during the event, the entrepreneurs in attendance believe in the importance of visual and printed media to foster social entrepreneurship in particular. “I would like to see more non-political media,” says Rania Fahmy, CEO of Banati, a foundation that aims to protect girls at risk of leaving home due to domestic violence. On the other hand, Salma El-Hariri, co-founder of PITME, a global institution aiming to turbo-charge the Middle Eastern startup ecosystem, said she “wishes for [media] platforms that would… help create interactive networking between concerned entrepreneurs, investors, and citizens.”

A second session was focused on the newest fundraising techniques and how female social entrepreneurs can utilize them. Nima Adelkhani, co-founder of PITME along with El-Hariri, emphasized the growing importance of crowdfunding, especially in the context of Muslim majority countries. The session “concluded that crowdfunding… is the most convenient new fundraising technique for social entrepreneurship projects [in the Arab world], given that it’s close to the [Islamic concept of] zakat,” or almsgiving.

The third and final session dealt with the financial sustainability of social entrepreneurship initiatives and citizen sector organizations. The session addressed opportunities and challenges in creating profitable business models in this sector. The attendees agreed on the importance of social entrepreneurs determining their business model right from the beginning, instead of the relying on customers, donations, and charities.

The second part of the event included a short documentary screening that showcased four examples of social entrepreneurship projects run by female entrepreneurs:

The event concluded with a panel discussion that included Amany Asfour (president of the International Federation of Business & Professional Women and the first Egyptian woman to head the Common Market for Eastern and Southern Africa business council), Hiba Jamal (the managing director of Endeavor Egypt), Marwa El-Dali (founder and chairmember of the Board of Trustees of Waqfeyat Al-Maadi). The dialogue between these three prominent female entrepreneurs focused on the importance of the entrepreneur’s belief in her idea, perseverance, and search for experienced people to employ as well as to seek advice.

Will Egyptian female social entrepreneurs be able to apply these guidelines on the ground to satisfy their ambitions?