Mobile app developers are increasingly seeking to address not only problems, but also mere inconveniences, in peoples’ daily lives. For example, the Egyptian startup Swipe N Tap attempts to provide a solution for people who are waiting for a meal at their favorite restaurant. It saves time by creating an interactive link between client, waiter, kitchen, and management in simple steps.

Tarek and Alaa Sryo are both also the CEOs of SASCO, an Egyptian family business specialized in manufacturing office supplies. They are also part of Endeavor, a company of high impact entrepreneurs that seeks to help develop the economies of emerging markets. 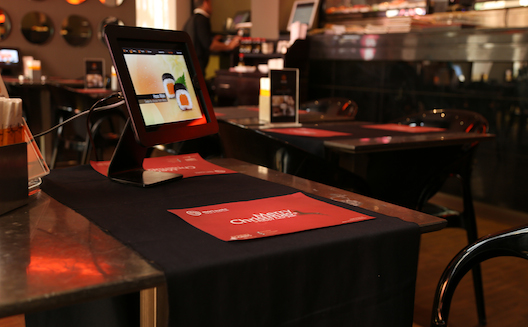 They decided to invest (an undisclosed amount) in Swipe N Tap because they believe the Egyptian market needs new ideas. “I think the application can play a major role in activating the restaurant movement, especially in light of the noticeable recession due to the fallouts of the political crisis on tourism and hospitality sector during the last three years,” says Tarek.

They got even more excited when they succeeded in convincing Khaled Ismail, founder of KI-Angel and a leading Egyptian VC, to join them. Ismail also liked the Swipe N Tap idea for its novelty in the Egyptian and Arab markets. “The Egyptian market is still young and fertile, enough so to accommodate new tech ideas,” he says.

“Swipe N Tap is characterized by its strong technical team,” Ismail goes on. “It also has an easy and attractive user interface. All these features motivated me to join the team.”

Nearly eight months ago, the team launched the first version of the application Swipe N Tap. It was integrated in a special tablet and only had one restaurant on board: Mori Sushi. Four months later, the company launched an updated version including a variety of Cairo restaurants as Crave, Chili’s, Makani, Coffeeshop Company, Aroma, and Tamara.

The application is easy to use and simplifies the order and submission process. The customer enters the restaurant and finds a tablet on their table, on which they can check the menu, make an order, and verify the bill. After the customer submits the order, the waiter’s corresponding device notifies them that the order is ready. The order also appears on a screen in the kitchen. The waiter is notified when the kitchen has prepared the order, and then they bring it to the customer.

Even after submitting the order, the tablet will keep the customer occupied. They can click the Fun Box to watch the best goals in international football or read a monthly magazine. From the restaurant’s perspective, the application allows the management to monitor and regulate financial and administrative operations. The Manager App allows the manager to follow up on the number of occupied tables, the volume of orders, timing, and sales.

The developers haven’t yet revealed all the new features they are working on now, but they did allude to some that will facilitate integration of the application with specialized accounting and administrative programs for restaurants, and an analysis service that shows the number of clients per day, their orders, and bills in detail. There will also be an evaluation section where clients can write reviews of their experience. The team is also working on a mobile app for both Android and iOS.

Ads are one of the two revenue sources. Advertisers can choose between having their ads on the Fun Box page or as a pop up while the customer is browsing. At this point, the company has signed advertising contracts with Vodafone, Cafix and Quanta Egypt.

The other source is restaurants that buy tablets with its integrated app for each table. To use any of the app features, the restaurant must pay extra fees. Sryo refused to reveal the prices but pointed out that they are cheap and accessible to everyone.

Currently the app is activated for use in Egypt and Qatar. But the company is negotiating so that international restaurant chains in the region, especially in the GCC and Turkey, can use it. The team is also trying to sign a contract for manufacture in China.

North American and Asian countries have seen the launch of companies with a similar model with tangible success. Many websites specialized in tourism are asking: is the future of waiters at risk with the innovative tablet ordering system? Even though individual opinions tend to think that a human waiter with a personality is still attractive factor for clients, we can’t ignore the success of companies such as E La Carte. At the end of last year, it managed to make a deal with the international Applebee’s chain. The company has provided the restaurant chain with 100,000 tableside tablets to cover all the U.S. branches by the end of 2014, according to TechCrunch.

E La Carte studies revealed that menus tablets helped increase sales by 10%, speed up service by an average of seven minutes per order, and increase the number of clients registering for loyalty program by nine times. Can Swipe N Tap achieve that in the Arab world?