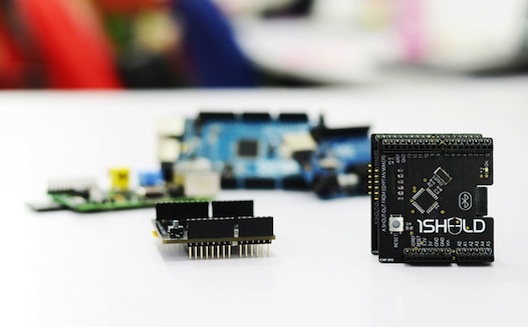 $85,210 USD. That’s how much funding the Egypt-based startup Integreight attracted for its award-winning product 1Sheeld during its 30-day Kickstarter campaign at the end of last year. The campaign, which shattered its goal of $10,000 USD in a mere six hours and brought in more than $45,000 in the first four days, garnered quite a bit of fanfare for the eight-strong Integreight team and their reconfigurable, Android-operated Arduino shield.

“The Kickstarter campaign was a huge moment for us. Crowdfunding in general doesn’t only provide funding, it provides publicity and testing for the product’s demand. You’re testing the product idea with the people,” Integreight co-founder and CEO Amr Saleh told Wamda. “It provides you with quite a lot of visibility, and the most important part, you’re building the product with the community.”

With over 1,400 backers from all over the world, it appears that the Arduino community has approved Integreight’s 1Sheeld.

In the several months since the conclusion of its Kickstarter campaign, the Integreight team has been keeping busy. On the product development and production side, the team has been working hard to get 1Sheeld ready for its promised May 2014 delivery date. They have been modifying and testing the 1Sheeld design, trying to locate and fix bugs, and finalizing the prototype. This process has led to some logistical challenges as the team relies on parts and prototyping from outside of Egypt.

“In hardware in general, when you fix a bug it takes like three to four weeks because you have to rebuild the circuit and order it from outside of Egypt, which takes a lot time to get here,” said Saleh, who is currently in China to oversee the beginning of production.

In addition to the 1,300 or so 1Sheelds already sold to backers of their Kickstarter campaign, Integreight is now accepting preorders on its website and is already receiving business from notable tech-savvy markets such as the U.S., Japan, the Philippines, and Singapore.

The Integreight team has also been honing its entrepreneurial skills and know-how. Saleh and fellow co-founder and CTO, Islam Mustafa, recently returned from Blackbox Connect, a two-week immersion program at the Silicon Valley-based accelerator, Blackbox.

“We learned a lot about pitching, about talking to VCs, what VCs want, what investors like to hear, about our due diligence before we speak to investors, and how to build momentum,” said Saleh. “It was an amazing experience, and it ended with a demo day where we pitched our idea in front of 150 VCs, entrepreneurs, and other members of the Silicon Valley community.”

The team will be back in the Bay Area in May for the 2014 Maker Faire, an event that attracts tens of thousands of tech enthusiasts, hobbyists, engineers, and tinkerers, which are collectively labeled ‘makers.’ Integreight is sponsoring the event and will be displaying 1Sheeld throughout the weekend at its booth.

The future looks bright for Integreight, and the team is currently in talks with a number of investors. Their focus, however, remains on developing their future roadmap, which includes the continued development of 1Sheeld and a refocus on the team’s original product, the Smart Breadboard, which allows hobbyists and engineers to easily design circuits using schematic software that eliminates the time-consuming task of wiring electronic circuits. The Smart Breadboard won first prize of the information and communications (ICT) division at the 2011 Idea to Product Global competition in Sweden.