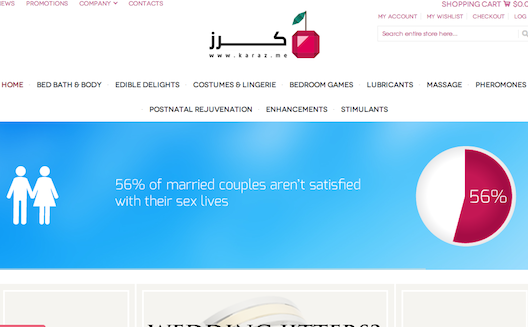 “It started one day when I was walking in Ramallah,” Ashraf Alkiswani says. “I was stuck behind these two guys in their late thirties, and I overheard one of them talking about something he’d ordered from Egypt – a mineral that improves your sexual performance.” Inspired right then and there to open an online shop for such products for the Palestinian and regional markets, Alkiswani interrupted the men to make sure that nothing like this was available locally. If his was the first such online shop in the region, he reasoned, surely there was profit to be made.

But in the two and a half years since the encounter, the extensive research he’s done personally (having spoken to over 70 pharmacists in Ramallah, Hebron, Nablus, and Bethlehem) and that which he’s collected from experts in the region, has led to a shift in his motivation. “After hearing shocking stories of the lack of knowledge and education” in the region, and how it’s affected marriages, families, and entire villages, his mission has turned into one of public service and education rather than financial reward. “Ultimately what I would like to address,” he says, “is that it’s neither haram [forbidden by Islam] nor 3aib [socially inappropriate] to discuss sexuality with your husband or wife, or a health professional.”

Karaz, the fruit of Alkiswani’s research and work, is an educational source on sexual health and relationships featuring original blog posts and articles addressing topics regarding sexuality in the context of marriage, he explains over coffee in a trendy Ramallah café, as well as a halal e-commerce shop selling intimate products and ‘marital aids’. Products on offer are massage oils, lingerie, costumes, pheromone-scented candles and perfumes, enhancement products, and massagers. The project, whose name means ‘cherries’ in English, recently received nearly $100,000 USD in seed investment from Palestine’s Arabreneur fund, which will also offer technical and logistical assistance, mentorship, office space, and international networking opportunities.

Fully aware of the conservative nature of the market in which he’s attempting to sell products for intimate relations, Alkiswani has tread gingerly. “The first thing I did after coming up with the idea,” he says, “was go to the Dar Al Iftah Al Filistineh [the governmental agency that decides if something can be permitted under Islamic jurisprudence] and pitch my idea.” He still seems surprised at its verdict: “The committee said my idea was fine, as long as I followed several guidelines,” including that the products were clearly intended only for married couples. For those concerned with whether Karaz is haram, the document issued by the committee is prominently displayed on the website.

Telling his family about his idea was another hurdle, but one that led him to develop convincing pitches to different audiences, a skill that has since served him well. “My father is a doctor, so I approached him from the medical educational perspective; my mother is really religious, so I approached her from the perspective that Karaz would help decrease divorce rates and increase family harmony. They both loved it.”

Despite his careful choice of language for the site (‘marital aids’ etc.) and his emphasis on its pro-family goals, investors have been wary. His first pitch to investors was rejected outright as being “too risqué,” although the fund managers liked the project and agreed to help him find investors outside the program. But six days before the first Arabreneur pitch event last fall, the board decided to invite Alkiswani to participate. “I had only six days to pull together all I had learned in two years,” he laughs, into a cogent proposal, including a website. Despite the rush to prepare it, his pitch was polished enough to win the investment from Arabreneur.

Arabreneur’s investment has made it possible for Alkiswani to quit his full-time job at the nonprofit AMIDEAST, as well as hire a team of three – a freelance writer based in Amman (who blogs for the site under the pseudonym Scheherazade), a social media manager and content editor based in Nablus, and a developer in Germany – despite the fact that sales are “nowhere near where they need to be for us to pay the employees,” he says.

One of Karaz’s immediate goals is to “increase page views,” and of course, to convert any increase in visitors to sales. But beyond this, he hopes to further build out the platform to fulfill better the educational dimension of its mission. First, this means publishing at least 200 articles on the site; only then will Alkiswani focus on developing the “online consultancy” with doctors, nurses, mental health professionals, therapists, as well as sheikhs, for people too shy to ask their questions directly, or for those who live in remote areas. Alkiswani’s family has connected him so far with six doctors and sexual health specialists in the U.S., Palestine, and the Emirates, and three sheikhs in Egypt, Saudi Arabia, and the U.S.

While his initial impulse to start the company was pure entrepreneurialism, his attitude now – as well as that of Karaz – is much more aligned with education and social welfare. Alkiswani seems more animated when talking about fan mail he receives than when we discuss potential revenue. At the end of the day, “I launched Karaz to tackle awareness and education from a wide variety of different angles,” including religion, culture, and health. If he gets rich in the process, it would just be the cherry on top.