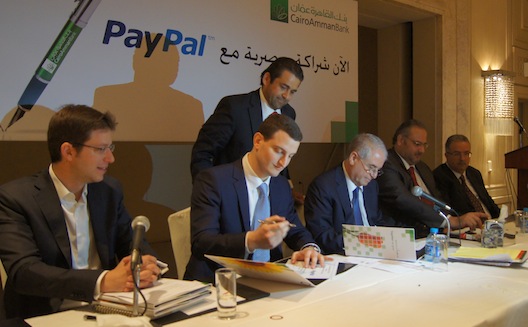 PayPal, as part its continued expansion throughout the Middle East, announced a new partnership with Cairo Amman Bank yesterday at the Grand Hyatt Hotel in Amman.

The new partnership, PayPal’s second with a regional bank, will attempt to integrate PayPal services with CAB banking, with the goal of facilitating e-commerce transactions for both consumers and merchants.

“When we started [in the MENA region] in 2012, we saw a great opportunity because while e-commerce was already there and people were shopping online, clearly there were lots of barriers for getting more people online. If you compare the penetration of e-commerce in the Middle East overall, even in Gulf countries… you can clearly see that there is a lot of room for growth for e-commerce,” Laurent Wakim, Regional Manager of PayPal MENA, told Wamda.

The integration is designed to break down some of the barriers to e-commerce adoption in Jordan by making it easier for CAB customers who want to buy and sell online, according to officials from both parties.

Under the new partnership, CAB customers will be able open a PayPal account and top it up directly from their online banking platform. Additionally, CAB will allow its customers to complete transactions online using their debit cards, which according to Wakim was not possible prior to the agreement signed on Tuesday.

Merchants who bank with CAB will also be able to withdraw sales revenues stored in their PayPal accounts directly from their local bank in Jordanian dinar.

“We see Jordan as being at the edge of technological innovation. There are lots of startups and e-commerce merchants that either started here or have operations in Jordan. So for all these merchants, we’re giving them more flexibility and convenience and a better way to manage their cash flow. Within four or five working days they will get their money in their bank account,” said Wakim.

Because of the potential he perceives for the new service to boost e-payment adoption among Jordanian startups, PayPal will be looking to introduce the feature to other countries in the region in the future, Wakim said.