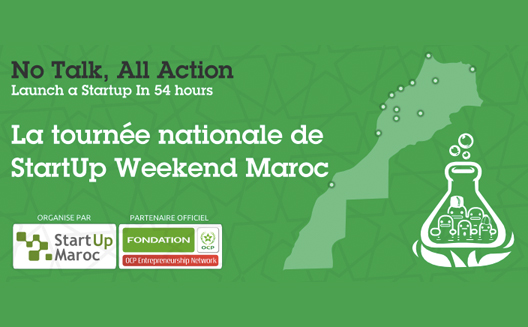 April is a busy month for Startup Maroc. The group of friends, who have been working for three years to help foster an entrepreneurial culture in Morocco, has turned into its own success story, as we explained in this profile last year. Now, after changing their name to a more marketable one – goodbye ‘AMPII’, hello ‘StartUp Maroc’ – the organization has added new cities to its Startup Weekend roadshow, announced an upcoming report on the state of Moroccan entrepreneurship, and is launching the second edition of their national competition StartUpCup.

The Startup Weekend roadshow launched this year with an event in a new city, Khouribga, from April 4– 6, held at the École Nationale des Sciences Appliquée. More than 200 participants took part in the event, presenting a total of 65 ideas. In the end, they grouped into 15 teams, each advised by one mentor.

Still driven by their mission of supporting Moroccan entrepreneurship, the organization also announced two other initiatives.

The first one is a study, in partnership with Capital Consulting, aiming to analyze the needs of the Moroccan startups in order to better serve them. This study will also engage with the need to unite the local players in the same place, similar to the Silicon Valley model.

The second project is a business plan competition: Maroc StartUpCup, the Moroccan version of Silicon Valley-based international network of events taking part in 65 countries. Following the success of its first edition – read our review here – the organization has decided to renew it.

Faithful to Startup Maroc’s mission to educate young entrepreneurs, the competition goes much further than awarding a winner; it also coaches and advises participants throughout the six months of competition to help them build and share a viable story around an attractive business model. The competition also helps startups highlight the need they’re addressing, define their market, and develop a solid financial plan that works with their business model. Interested startups have until April 30 to register.

After deliberation, the jury gave Startup Weekend Khouribga’s 3rd prize to the Healthy Food team for their barcode-scanning app that provides users information about the product their scanning, useful for anyone suffering food allergies, or following a specific diet.

The second-place prize went to Enjoying Learning (Madrasti L7ilwa in Arabic) for their educative and playful mobile app and their educational robot prototype, named CREMO, which they’ve already tested on kids and their parents.

BesTiming won the first place, which came with a prize of 10,000 Moroccan dirhams (just over $1,200 USD), as well as a tablet, for its mobile app that mixes task management, geolocalization, and space, time, mood and even weather features.